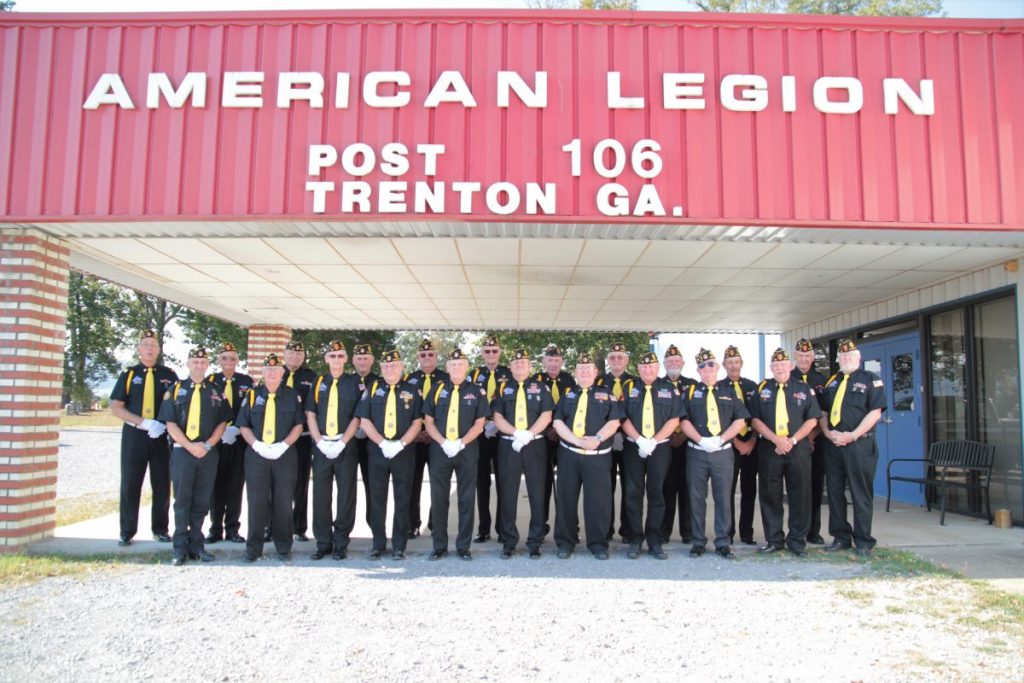 Members of the Honor Guard from American Legion Post 106.

Post 106 member Gary Bell started the Honor Guard in 2013, because he saw that there was a need.

“I got the idea from my own father-in-law’s gravesite, because there was no one there to fold a flag for him,” Bell said.

Him and another Legion member decided right then and there to fold the flag at that funeral.

“The very first funeral we did was for one of our own, Ray Steele. It was just three of us,” Bell said. “The team immediately started growing.”

Before the local Honor Guard was formed, the Honor Guard in Sequatchie County, Tenn., would help out in Dade County when needed.

“Sequatchie was our mentors. They taught us a lot. We liked the way they did it. They were very precise,” Bell said.

The Honor Guard has been at funerals as far away as Valdosta and Huntsville, Ala.

“We have done funerals at every cemetery in Dade County, some at people’s homes, and at Chattanooga National Cemetery,” Post 106 Honor Guard Commander, Ronald Neugard, said.

Members of the Honor Guard are all volunteers, just as everything else is on a volunteer basis for the American Legion. They have to pay for their own uniform, and supply their own means of transportation for each of the funerals. Everyone donates their own time.

Eleven members of an Honor Guard are needed at a military funeral. There are currently 18 members of the Post 106 Honor Guard. Two people fold the flag, and one recites the folds of the flag. There are seven people who do a gun salute, and one member plays Taps.

“We are the only ones to my knowledge that recites the folds of the flag,” Bell said.

The family is also given a small pouch that contains three rounds that are engraved with the name of the deceased. The three rounds stand for duty, honor and country.

“All of this is free. We don’t charge anything for it. We have, from time to time, received donations, but we do not solicit donations,” Neugard said

“I had some friends who didn’t come home. I am a Vietnam veteran. I do this in honor of them. I don’t do it for myself,” Neugard said.

There is another local Honor Guard that partners with American Legion Posts 106, Post 38 and Post 89. They cover funerals in the Alabama area, including Ider and Flat Rock. They have done 79 funerals so far.

“We trained them and took them to funerals with us. “We help each other out. If we are short, we call them. If they are short, they call us,” Neugard said.

Neugard says that the American Legion, and the Honor Guard, could always use more members.

“The Honor Guard does a great service for the county. We get cards, saying how grateful they were that we were there. It is a pleasure and an honor for us to do it,” Neugard said.