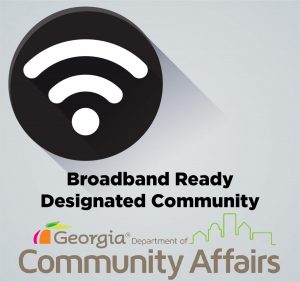 Dade County has been designated as a Broadband Ready Community, one of 26 in the entire state of Georgia.

In 2018, the state launched the Georgia Broadband Program, part of the Achieving Connectivity Everywhere (ACE) Act.

According to broadband.georgia.gov, “Broadband Ready Communities recognize that high speed internet is critical infrastructure to their community. These communities prioritize the need for expansion, incorporate the need for broadband into their goals and strategies, and promote themselves as ‘expansion ready.’”

“The meetings that I’ve been to over the last couple of years, they compare broadband now to when people first got electricity. That’s how important it is now. It is a part of our everyday life. We’ve got to do something, it’s got to happen,” County Executive Ted Rumley said.

The initiative calls for the promotion and deployment of broadband services throughout the state to unserved areas with a minimum of 25 Mbps download and 3 Mbps upload speeds.

“Broadband deployment is a big discussion in Georgia, and as of last year with COVID-19, we found that school systems, and homes in rural areas needed broadband more than ever. It really put a spotlight on the commission, the county, the city and the state level,” Dade County Clerk and Finance Officer Don Townsend said.

In preparation, the county adopted Ordinance No. 04-04-19 in September 2019 for “implementing rules and procedures for a broadband ready community.” The city of Trenton also adopted a similar ordinance around the same time.

“It puts the ball back into the county’s court. Say a county in Georgia has an independent provider, but they are not permitted or they don’t have the capitol for putting lines in the ground. If they become a designated community, it opens them up to grants that typically we can’t access until we’re in that designation. This allows companies to come in and take a look at it. It levels the playing field,” Townsend said.

According to Townsend, the ordinance allows the county to accept applications from different companies, if they want to file an application for a broadband network project.

“It opens a lot of doors for us,” Rumley said. “It shows that we are ready. We’re not sure who will be involved in it. It could be Trenton Telephone, or EPB. We might even be working with Alabama.”

According to Townsend and Rumley, there are many spots in Dade County that do not have access to any type of internet.

“One of our very own Commissioners, Lamar Lowery … is in one of those areas that is underserved,” Townsend said

“We’re excited about it, and we’re still learning about it,” Townsend said about becoming a Broadband Ready Community.