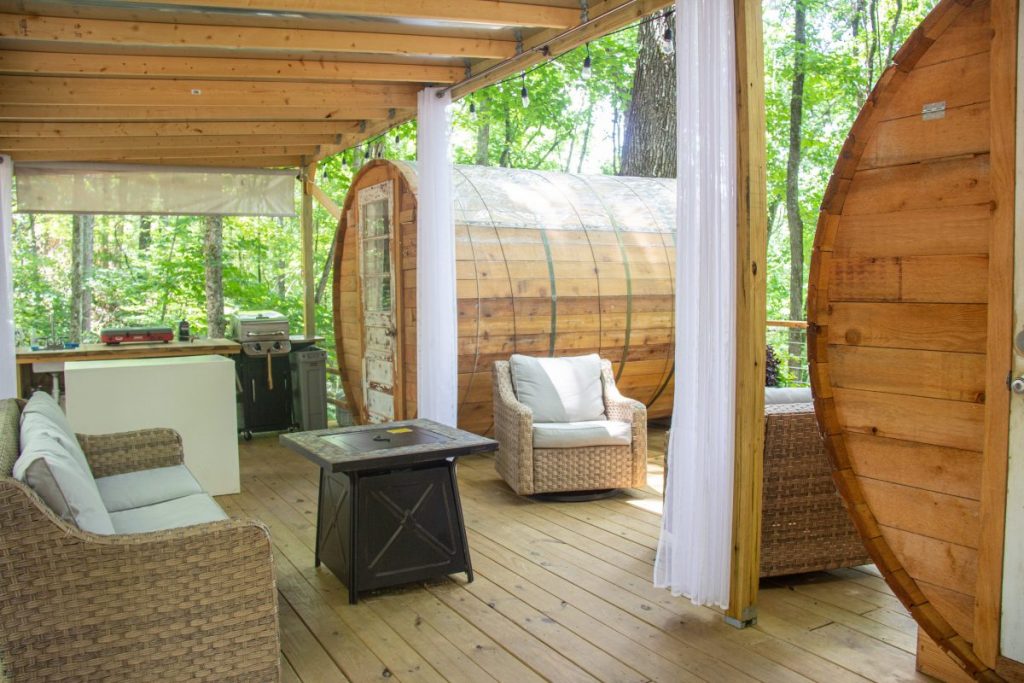 If you’re looking for a unique, outdoor staycation experience in Dade County, look no further than Canopy Treesort.
Canopy Treesort is a treehouse/deck type of property, which brings the outdoors in.

Ched Sharpless is the owner of Canopy Treesort, located at 1101 Burkhalter Gap Road, Rising Fawn. Sharpless said the idea of the property came from wanting to be outside, but still comfortable.

“I can spend all day outside. Hiking, walking, biking, climbing. But when it’s time to go to bed, especially if there is inclement weather, I would like to be inside, on a nice comfortable mattress. If it’s temperature controlled, even better,” Sharpless said.

The main feature of Canopy Treesort are two large cedar barrels, where the beds are located. Sharpless built the barrels himself, with help from friends and family, on site.

“I saw saunas that people were using overseas, and I thought, ‘That is perfect,’” Sharpless said.

The barrels have a bubble dome at the end, so the view can be enjoyed while in bed.

The barrels feature two twin beds that equal a king sized mattress. One of the barrels has an air conditioner, and also a built in fan. Heaters are available during the winter. There is also closet space, and shelves.

“There is something surreal and warming about being inside of it,” Sharpless said. “You just want to curl up and stay there for a while.”

A griddle top is available to cook, as well as a stove top burner. There is also a gas grill and a refrigerator. Utensils and dishes are available.

Downstairs, underneath the deck, is a bathroom with a toilet and shower.

All of the water is provided by rain catchment, which goes into a 1,200 gallon cistern, and is filtered by a three-stage process.

There is also plenty of space to relax, with a couch, chairs, and a fire pit with camp chairs. There are mosquito nets that can be closed to provide some privacy and keep rain out.

“The idea is to show up with just your clothes, food, personal items, and you’re good to go,” Sharpless said.

It has been almost a year since Sharpless purchased the land. In the beginning, Sharpless didn’t intend to rent it out, but he decided to list it on vrbo.com, with a start date that seemed far out at the time.

“Somehow it popped up. I only had one barrel built, not even a railing, no stairs, and people were renting. We first started renting in November,” Sharpless said. “It took about four or five months to build, and it’s been rented pretty much every single weekend since then.”

Sharpless said that the reviews have all been positive. Kids, adults and couples love it. Sharpless says his family loves it too, having stayed in it for a full month during the building process.

Since opening, the property has expanded from 12 acres to 22 acres. In the future, Sharpless wants to have walking trails, disc golf, sky bridges, and yoga platforms.

Sharpless is originally from St. Thomas, Virgin Islands, and his background is in the restaurant industry. He never expected to own a rental property.

In 2017, St. Thomas was hit by Hurricanes Irma and Maria. After the two hurricanes, the family transitioned to living temporarily on Lookout Mountain. The family was going to stay there, while Sharpless was getting things settled and rebuilt in St. Thomas. Then the pandemic started.

“We really love it here. This was a great time to get back up here, and also, to try this concept,” Sharpless said.

Weekend bookings require a three-night minimum stay, and weekdays are a two-night minimum. Canopy Treesort can be booked by visiting canopytreesort.com, airbnb.com, or vrbo.com.