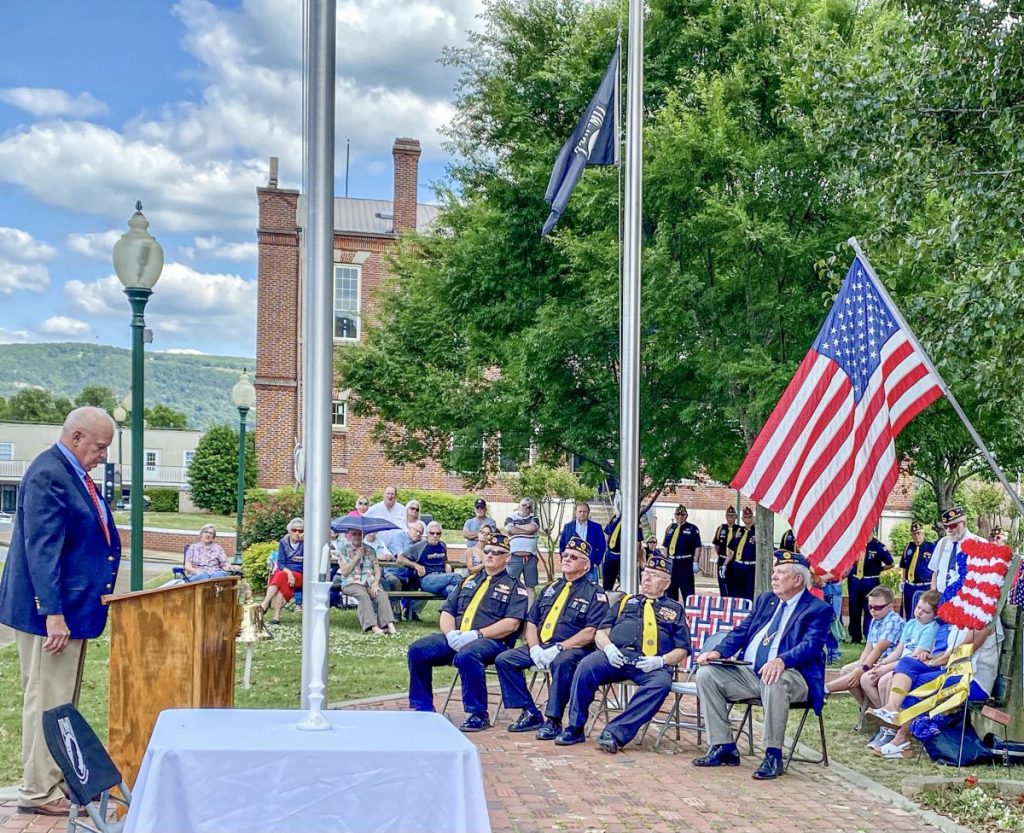 American Legion Post 106 held a Memorial Day Service at the Veteran’s Park on Monday, May 31.

Blaylock started the program with a prayer, Terry Lance led everyone in the pledge of allegiance, and Carey Anderson sang the National Anthem.

“I want to express to you, speaking for the county, how much we appreciate these men at our local post,” County Executive Ted Rumley said. “I want all of you to talk to your grandchildren, and your grandchildren’s children and try to bring this message about who you are and these people that we have lost that have given us the right to be here today.”

Rumley also spoke about Allan Bradford, who did a lot of work for veterans as part of the Legion.
“Allan Bradford, as commissioner, and as a man, he has kept this going, these bricks,” Rumley said about the dedication bricks laid out in the park.

“He got this sacred place here dedicated. I know he is watching us today and he is missed,” Rumley said.

Colonel Mark King, retired U.S. Marine, was the guest speaker during the event. King, an All-American football player, was a football coach in Alabama before joining the Marines, which he was a part of for 28 years.

“Several times in the past 10-12 years I have talked to high schools, and churches and different places. One thing that I always tell them is that Veteran’s Day is not really for the veteran, because we the veterans do not need to be reminded of what we can never forget. Veteran’s Day is for the 93 percent of Americans who have not served. This fact is even more true for Memorial Day. The brave men and women who have died, they don’t need reminding. The families of those brave men and women, they don’t need a reminder. They live with it every day. The veterans who served with them, we need no reminding,” King said.

King continued, “All gave some, some gave all. It is for those veterans who gave it all that we are here today. This day is about honoring and remembering those who gave all, so we can live free. The greatest irony is that the men and women, who earned our freedom with their blood never got to truly enjoy it, did they? Today, as you celebrate and honor this time, enjoy your time. They want you to enjoy your time, but please pray a prayer of thankfulness.”

There was a Prisoner of War Missing in Action empty chair ceremony, to honor and remember all POWs all unaccounted for, as well as a flag folding ceremony by the Honor Guard.

D.D. Bain, 99-year-old World War II veteran, was at the ceremony and was recognized.

The names of the people that have passed on in the last year were also read. A bell was rung with each name.

The program concluded with a 21–gun salute and the playing of Taps.

It was noted during the event that 787 flags were put on local veteran’s graves for Memorial Day.

Any veteran that is not a member of the American Legion was encouraged to become a member. To learn more about American Legion Post 106 contact Post Commander Gary Moore at (404) 376-9596.