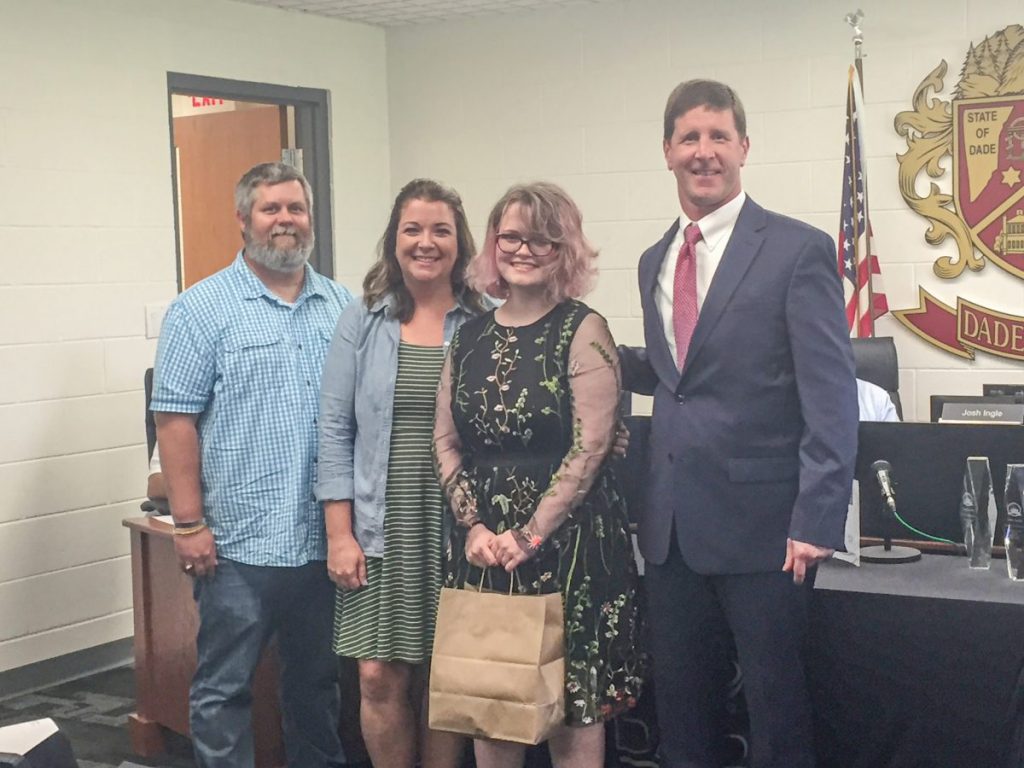 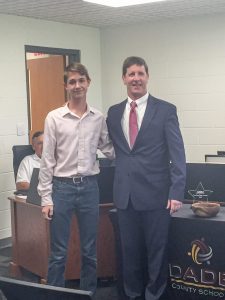 Normand Lavoie and Michael Ryan, co-owners of NewTerra Compost spoke to Dade County Board of Education members during the Monday, May 24 meeting, about opting into a USDA grant, which would teach children about food waste and composting.

NewTerra Compost is a local business, in which composting is done on a plot of land in Wildwood.

“We are also an educational company, to tell people what composting is … I think that we should start teaching our children a better way of disposing their trash. Most people do not know that a head of lettuce can last 25 years in a landfill,” Ryan said.

“USDA has a $2 million grant for local governments. It will be broken up into increments for schools all around the country. What they are looking for is local governments that can partner with private groups like us to show a full circle of food waste. We would need the local government to step in and take charge, but we can provide the execution and education behind it,” Lavoie said.

The grant would last for two years, and grant applications are due July 16. Lavoie and Ryan would like to see two NewTerra Compost waste containers set up at each school. For a school year, from August to May, it would cost each school $4,600. The grant could cover 75 percent of those expenses.

Ryan and Lavoie would also like to incorporate a kickoff event and talk to teachers and students and teach them about composting.

“We would love to see Dade County be the leader for Georgia, because this is where we are set up. We want to work with you on this, to develop what Dade County needs for the school system,” Lavoie said.

Also at the meeting, Anthony Dye, Director of the Children’s Advocacy Center and Martha Baker with Dade First Family Connection recognized Abigail Holmes as the winner of the art contest at Dade Middle School for Child Abuse Awareness Month, which was April.

Her winning art project featured a pinwheel with many hands holding onto it with the saying “Let them be heard” at the top. Pinwheels are the symbol of Child Abuse Awareness Month.

“It takes a lot of hands, a lot of people, to spread awareness. We cannot do it by ourselves. We had 16 children form the middle school turn in art projects. They will all get a handwritten thank you note from me,” Dye said.

Shenea Hill, Director of Career and Technology Innovation, gave an update about the NASA HUNCH Program at the Dade Middle School.

“We started health science, which is the first of its kind. Our health science students are working on mental health for astronauts,” Hill said.

The students are working on something for the astronauts to smell, to remind them of home.

Art students are working on patches that have their hardware on them, such as the tape dispenser project, that the astronauts will wear in space.

Media students competed in the CTE Month and NASA HUNCH media competition, and got Honorable Mention.

“They competed against high schools, so for them to get honorable mention is great,” Hill said.

Dr. Cleta Long talked to the board members about the Jammin’ June Summer Meals Program. Meals will be distributed once a week. There will be seven days of meals that include breakfast and lunch.

“It is looking like we have almost 900 kids signed up,” Long said. “We are really pushing this because there is a lot of information about cognition retention over the summer when kids are fed properly.”

The meal program will include themed events such as sports day and animals.

The board members also heard about the media center update from Long.

“We are excited about what’s going on. The pandemic has effected not only people and livelihood but also the supply chain. The following weekend we should have our company back in finishing things up,” Long said.

“They are top notch and I am very proud of them. I can’t wait until they are finished so we can have the proper open house,” Long said.

Supervisor of Facilities and Transportation, John Smith, reported that the bus drivers have had zero accidents for the entire school year.

“That’s close to 250,000 miles in a year. I think that is worthy of commendation. These drivers are very conscientious,” Smith said.

The board also approved the Fountas and Pinnell Classroom Reading Series for Davis and Dade Elementary Schools.

Director of Academics and Testing, Patti Johnson, spoke to the board about the Reading Series.

“This program that we are proposing to you, it is going to be for grades K-5. Books are written by Fountas and Pinnell for the most part. Books that are taken from other authors, they do monitor those and read them,” Johnson explained.

The board approved authorization to board attorney, Cory Kirby, to have a conversation with the Dade County Commissioners for the design, construction and maintenance of a storm shelter on Board property at Davis Elementary.

The board also approved several board policies, including Policy BCBI – Public participation in Board meetings, Policy DFK – Gifts and Bequests, Policy DIB – Financial Reports and Policy JBCB – Non-Resident Students. Each of these were laid on the table for 30 days. Policies can be read online at dadecountyschools.org by clicking on “Administration,” then “Board of Education,” and then “Board Policies Online.”

The board also approved Jenna Knox, Dade Elementary Media Specialist, as the Dade County Public Library Board of Trustees Appointment for the Cherokee Regional Library System.

The board approved a bid from P&C Construction for Dade County Middle School gym construction and site improvements.

The board also agreed to change the scheduling of two courses. Currently, government is taught in ninth grade and world history in 10th grade. These will be flipped.

The board entered executive session to discuss personnel and property.

No action was taken after the executive session. The next BOE meeting will be June 28.

Wasawillow Daylily Sale Is This Weekend

Residents Have Until July 13th To Appeal Assessments

ABC Board Asks For Ordinance Amendment