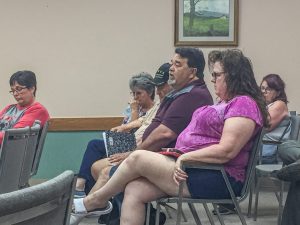 Police Chief Steve Beaudoin has been reinstated a week after being demoted, after an appeal hearing and an hour–long executive session on Thursday, May 27.

Prior to the executive session, Beaudoin appealed to the Commissioners, stating that he felt he hadn’t done anything to be demoted.

“What do you feel that you were accused of that you didn’t do,” Wooten asked.

“The last incident, when I violated the girl’s rights. I didn’t violate her rights,” Beaudoin said.

Beaudoin continued, “Her boyfriend showed up at my house and told me who his girlfriend was. I said, ‘I thought you broke up. I am glad you got back together.’ He said, ‘No, she was raped.’ I said, ‘Okay, I thought it was all done and over with.’ He said, ‘Well what do you know about us.’ I said, ‘I don’t know nothing about you.’”

“I had other people tell me about this. I have lost a lot of sleep over this situation. Have you lied to your commissioner repeatedly,” Wooten asked.

Wooten said that she had heard that Beaudoin had given investigations to the Dade County Sheriff’s Office.

Beaudoin said that it was the rape case.

“I have no training whatsoever on rape … Tamara [Clayton] has the most training but she refused because she said her husband’s kids were coming and she didn’t have the time.

“So our investigator refused to do what you asked her to do,” Wooten said.

“Correct. And that is when all this started, when I confronted her. I said ‘Tamara, what you did was wrong.’ She blew up and she called Alex [Case]. A couple of hours later I’m in the office with Alex and my commissioner. Everything that Tamara told them, they were bringing it up on me. They wouldn’t even talk about what she had done at first,” Beaudoin said. “She’s not supposed to jump the chain of command. If she had a problem, she needed to come talk to me … she’s done it more than once.”

Police Commissioner Kirk Forshee and Mayor Case both responded to Beaudoin that they did agree that Clayton needed to follow chain of command.

“Well then you didn’t have a choice but to turn it over,” Wooten said. “That’s what it sounds like to me.”

After the executive session, Beaudoin was reinstated as police chief.

“I don’t feel it’s right to have someone in the position of police chief who has done the things that he has done that I have fully addressed in the executive session to the other commissioners. By reversing the decision to demote Steve, you guys are acknowledging that you approve the actions that I stated in executive session. I don’t agree,” Forshee said.

The Sentinel reached out to Forshee for clarification about the rape case in question, but did not hear back before press time.