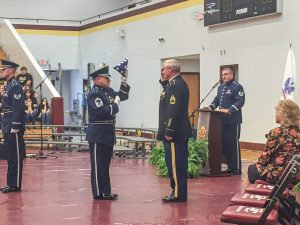 REBECCA HAZEN/Dade County Sentinel
Sammy L. Davis spoke to Dade County High School students on Friday, May 21. Davis is a Vietnam War veteran and a Medal of Honor recipient. Davis was presented with a folded American flag at the end of his presentation. 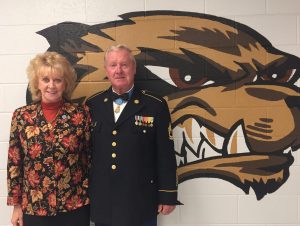 “Thank you to [Assistant Principal] Dr. Scott and the folks at the Medal of Honor Foundation and all the other groups that worked together to make today happen,” Principal James Fahrney Jr., said. “Getting to walk around the high school today with Mr. Davis was a pleasure. The way he interacted with so many of you guys, it shows me that he not only has a heart for his country, but also for the youth of America.”

Dr. Jeff Scott introduced Davis, and talked about the Medal of Honor.

“For you to experience a Medal of Honor recipient, I can’t think of anything better,” Scott said. “Please listen to what he says. It may not change your life right away, but it might in five, ten years.”

Davis enlisted as an Army soldier after graduating from high school in Indiana, where he was a member of the football and diving team.

“On Nov. 18, 1967, Mr. Davis found himself fighting for his life and the lives of 42 comrades, as the encampment was besieged by mortar fire and ground forces from an estimated 1,500 Viet Cong,” Scott said.

During the next 48 hours, Davis would discharge rounds of ammunition against the advancing enemy, and outsmart the Viet Cong by playing dead during the course of the battle. He assisted in carrying three wounded soldiers safely across the river that separated the warring forces, disregarding his own injuries, and his fear of swimming.

Exactly one year and day later, Davis received the Medal of Honor from President Lyndon B. Johnson at the White House.

The video footage of Davis receiving his medal from President Johnson was used in the movie Forrest Gump.

Students had the chance to ask Davis questions, as he passed around his Medal of Honor for everyone to look at and touch.

“My wife Dixie and I have had the privilege of traveling all over America and speaking to schools. There have been over one million holding this medal,” Davis said.

One student asked, “If you could do anything differently, what would you do?”

Davis said that he borrowed $20 from someone, and he didn’t get to pay it back because he was killed.

“I had the $20 before he was killed. I wish I would have paid him back. That has haunted my soul ever since,” Davis said. “I touch his name every time I go to the Vietnam Veteran’s Wall, and I tell him, ‘I know I still owe you bud.’”

Davis also recalled spending time with President Johnson’s wife, Lady Bird, at their ranch in Texas. Davis was stationed nearby, and President Johnson told him to visit at any time. Johnson wasn’t home, as he was always in Washington D.C., but Lady Bird would get Johnson on the phone each time and they would all talk.

“I have had the privilege of meeting and knowing every president since Lyndon B. Johnson,” Davis said.

Another student asked if his military experience changed him in any way.

“Having the medal, and knowing what it means, I have always tried to live up to it, to do better and to be better,” Davis said. “It gave me a distinct direction to go.”

Davis wears a flechette round around his neck.

“It’s a mold off of one of them, I had 30 of those in my body. I was shot 30 times. I have worn this one close to 50 years. It is still sharp and it still pokes me, but it reminds me that no matter how bad things get, it could be worse,” Davis said.

Davis said that he has had the honor of knowing each and every Medal of Honor recipient.

“We are a small group, and we try to gather every year,” Davis said.

As a Medal of Honor recipient, Davis has traveled to almost every country in the world, visiting U.S. soldiers overseas.

Davis said that the happy memories from the military include the camaraderie with his fellow soldiers.

“We worked together, but we played together. When you don’t know if you’re going to live to see tomorrow, you have a tendency to play real hard,” Davis said.

Davis even played his harmonica, playing the song “Oh Shenandoah,” and told the students a story about his harmonica.

Davis didn’t want to write home to his mother and tell her about the bad things happening. So, his letters would be short and boring. This led his mother to think that he was bored out in Vietnam. His mother sent him the harmonica, so he would have something to do.

He did not know how to play, but he learned. One of the first songs he learned was “Oh Shenandoah.”

“We are artillery. The enemy knew where we were. I would sit in my foxhole and try to play Shenandoah. After a couple of weeks, you could tell what I was trying to play. Everybody in my unit, when they could hear me playing, they knew that everything was okay, because I was making sure the enemy wasn’t sneaking in,” Davis said.

Davis also spoke about some humorous times during the military, noting that they used to put peanut butter in unsuspecting soldier’s helmets.

“It was stupid, but it made everyone laugh. If someone was having a particularly hard day, we would butter up his helmet,” Davis said.

“Is there anything your sergeant told you that you remember to this day,” Davis was asked.

“You don’t lose until you quit trying,” Davis responded. “Keep doing your very best, and always stand up for what you know is right in your heart.”

Davis’ wife, Dixie, also spoke to the students, and gave them some advice.

“I’m old, so I’ve got some wisdom,” Dixie said. “Don’t settle, service to others will make you happy, and do one nice thing a day for someone.”

Dixie said that the two of them have had some of the best opportunities ever, including writing books, traveling, and meeting movie stars.

“We have a lot of wonderful opportunities, but our favorite thing is talking to schools,” Dixie said.

At the end of the event, there was a flag folding ceremony, in which the flag was presented to Davis, on behalf of Dade County High School.

Smoke on the Square

Dade Residents Are Encouraged To Apply For Dislocated Workers Grant

Qualifying For District 4 County Commissioner Is In Two Weeks