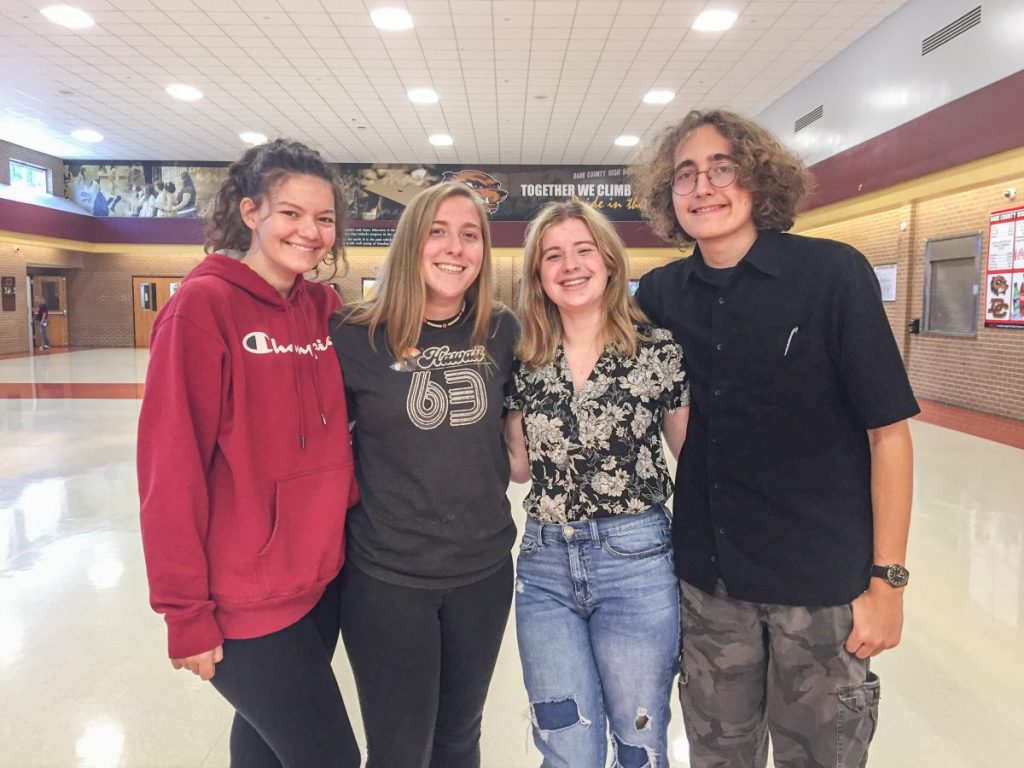 Another school year has ended, and the Dade County High School Class of 2021 seniors are gearing up for graduation, and preparing for their lives after high school.

The top four group gathered together to reminisce about their time DCHS, their upcoming plans, and their hopes for the future.

The students were involved in a multitude of activities. Nakhleh was involved with Technology Student Association (TSA), Future Business Leaders Of America (FBLA), 4-H, and this year’s school play. Roden played volleyball for four years, and was also involved in FBLA, Family, Career and Community Leaders of America (FCCLA), Future Farmers of America (FFA), Beta Club, Math Team and Literary Team competitions. Davis played volleyball for four years, soccer for three years, and basketball for one year. Davis also participated in Math Team and FFA. Hedden was involved with band for two years, theater, was Beta Club secretary, and was also in FBLA, FCCLA, thespian society, in school plays, and helped with TSA projects.

Nakhleh, Roden and Hedden all share a favorite memory of high school, what they call “Boecksgiving.”
“All throughout the month, somebody would bring in a snack,” Roden explained.

Nakhleh continued, “For Thanksgiving, everyone decided to bring a dish all on the same day. We had a Thanksgiving feast.”

“He was the best math teacher we have ever had,” Hedden said, about Troy Boeck, who is no longer at DCHS.

Davis said that her favorite memory from this year was prom.

“The mask mandate had just been lifted. It was finally our classes’ chance to let go. It was really fun,” Davis said.

The students share some of their favorite teachers, Dr. Doug Bailer, who teaches science, and Boeck, who was also a football coach.

“He’s really cool. We get to do crazy labs,” Nakhleh said of Bailer.

“He always had interesting point of views,” Roden said.

“She fosters a love of creativity and art in all of her students. She treats us like equals instead of students, which is something I appreciate,” Hedden said.

One of Davis’ favorite teachers is Heidi Wilson, the art teacher.

“She understands. If you have a problem you can come to her,” Davis said.

All four have the same favorite class, chemistry class with Dr. Bailer. They said that Bailer walks through steps multiple times if students are confused, he gives compliments to students who are doing well.

Roden said that for the class of 2021 as a whole, they want to be remembered “as the class that made the best out of what they had.” The others agreed.

When asked what they hoped for themselves for the future, all of them had a similar answer, to get the job they want after college, and to be able to travel and see the world.

The group of four all have plans to have a fun summer before it’s time to head off to college.

“We decided we were going to have a Mamma Mia summer where we have to do absolutely everything and we have to be very happy,” Roden said.

“I am planning on going to Colorado to tour my campus, since I haven’t been able to because of COVID. Maybe a couple of camping trips with my friends, too,” Nakhleh said.

Perhaps joking just a bit, Davis said, “I just want to do fun stuff that I’ve never done before. Like, risky things, because at this age we are risky.”

“Just enjoy it and be involved,” Davis said. “I was told all the time that it was going to fly by. I thought, how does four years go by? But it only feels like a little bit ago that I was a freshman.”

“Don’t stress out so much about grades,” Roden said. “I spent my entire time at high school stressing so much about everything, and it really wasn’t worth it!”

“If you are going to go home after school and sit and not do anything, go participate in a club or a sport. You will be making memories that way,” Nakhleh said.

“Just have fun. Don’t worry about too many things,” Hedden said.

Congratulations to the Dade County Class of 2021. Graduation is on Friday, May 28 at 7 p.m.