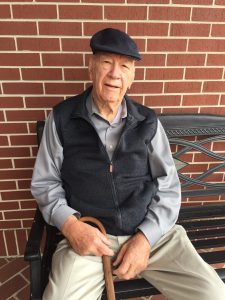 Charles Morgan has retired as a Dade County Magistrate after holding the position for 28 years.

“The majority of my adult life has been in law enforcement or related fields,” Morgan said.

Prior to his time as Magistrate, his career has included time in the Air Force, which included working with the Office of Special Investigations, a federal law enforcement agency that reports directly to the Secretary of the Air Force. He retired from the Air Force in 1970.

Morgan was also elected as sheriff in 1972, a position which he served for four years. He also worked for Tennessee Valley Authority with their public safety service.

“In 1992 when Tom Reed was elected Chief Magistrate, he asked me to serve, and from that time until December, I was in the magistrate’s office,” Morgan said.

Morgan said that the best part of the job was “meeting people and talking to people.”

The hardest, and saddest part of the job was the dispossessories.

“Georgia law is very clear. There is not much wiggle room when it comes to that. If they fail to meet certain requirements, they just have to move. It’s still not an easy thing though,” Morgan said.

“It was a privilege,” Morgan said about serving the county. “When Judge McCormick was elected, I never expected to be asked to be served again. He asked me to stay on and I appreciated that.”

Morgan’s advice to the new Magistrate is, “Georgia law is the controlling factor there. All they have to do is follow the procedures and they will be okay.”

Morgan jokes that this is his third official retirement.

When asked what he plans to do next in retirement he said, “Who knows?”

“I am 89 years old. I still try to keep busy, and spend a lot of time reading, and in the yard planting flowers. There’s no doubt about it, I have plenty to do,” Morgan said.