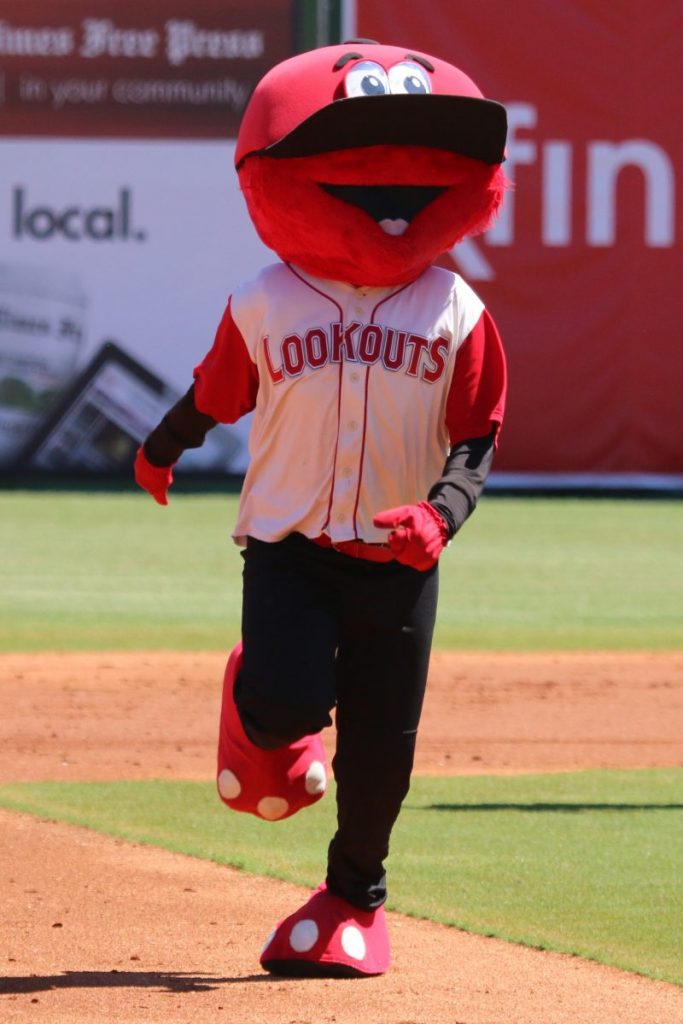 The Chattanooga Lookouts baseball season has started, and mascot Looie the Lookout is a fixture at all home games. Dade County native Zachary Langley has been performing as Looie since 2014.

A lot goes into being Looie, including making sure to be in the right place at the right time, getting used to the costume, and performing for thousands of spectators.

Transforming into Looie entails arriving early to each game, to ensure that Langley has time to go over the game script.

The Looie costume consists of an interior helmet mounted to three metal brackets. The helmet can be adjusted up and down on the brackets to best fit each performer. The base of the head is made of a thick plastic, and a fur exterior is attached to the plastic. The helmet has a chin strap that keeps Looie’s head in place.

“The head is massive. I have to be careful going through doorways to ensure I don’t hit Looie’s head on the door frame,” Langley said.

Langley can see through Looie’s mouth, and he said it was difficult to get used to that.

“With the vision in the mouth, if I want it to look like Looie is looking at someone with his eyes, I have to look down at their shoes,” Langley said.

The most common question that Langley gets is if it is hot inside the costume head.

“I’m constantly sweating the entire game. I have to wear a skull cap to keep sweat from rolling down into my eyes. I have to pace myself to make sure I’m not overheating myself. You have to build up a tolerance to wear that for a full game. It can be overwhelming for someone just starting out,” Langley said.

A typical game for Langley includes being on the field for the first pitch, line-ups and the National Anthem. Once the game has started, he will get into a car for the Looie Entrance. The car will take him around the warning track to introduce Looie for the game.

Langley remembers a Looie Entrance where things did not quite go as planned.

“As we were going around the warning track, one of the pitchers ran out of the bullpen, and directly in the path of the vehicle. The driver slammed the brakes, and I went sliding down the windshield and hood, falling onto the ground in front of a stadium full of spectators,” Langley said.

Looie will wander through the stadium to interact with the fans, pose for photos, and sign autographs. He is on the field or the dugout for in-game promotions and entertainment as the game script calls for. He’s always on the dugout for the seventh inning stretch.

The best part about being Looie for Langley is making the kids happy, and the hardest part is time management.

“If the kids are having fun, I’m doing my job right,” Langley said, but “I have to constantly be aware of where we are in terms of the progress of the game. It can be difficult when I have three outs to make it to the opposite side of the stadium, but I have a crowd of people cornering me wanting photos or autographs. It upsets people on occasion. People will sometimes yell at me to come back, but I don’t have a way to explain that I have to follow a script, so I have to go.”

“There were mascots from universities all over the country in attendance wanting to improve their skills. The camp made a massive difference in my performances. My manager at the Lookouts said it was a night and day difference from before to after attending the camp,” Langley said.

Langley is excited to be Looie again, after having a full year away because of COVID-19, and he says he has missed it.