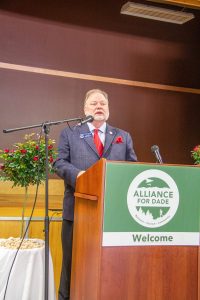 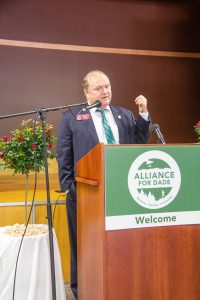 The Alliance for Dade held its first event, a networking lunch and learn, in the newly reopened Trenton Community Center, on Thursday, May 6, where attendees had the opportunity to hear speakers Senator Jeff Mullis and Representative Mike Cameron.

“These two men right here, Mike Cameron and Jeff Mullis, have been a great help to us,” County Executive Ted Rumley said. “Mike has been there a short time, but there’s hardly a week that goes by that he hasn’t come to our office. He has been to our meetings and to our events. Senator Mullis has always been there for Dade County. He represents the counties equally. We appreciate all that he has done.”

Senator Mullis represents the 53rd District, which includes Dade, Catoosa, Chattooga and Walker counties. He is Chairman of the Senate Rules Committee and is a member of the Senate Appropriations, Economic Development and Tourism, and Regulated Industries and Utilities Committees. Mullis also chairs the Senate Music Committee and the Halls of Fame Joint Committee.

“It is a team effort,” Mullis said. “Working with the community leaders and elected officials is what I think our prime job is. We have to make sure that we’re all working together.”

Mullis noted that he is the longest serving Republican in the state Senate, so he has seen it all.

“Georgia is a diverse state … Just because I think like you and vote like how you would probably vote, they don’t vote like I do. It is interesting to see how that process works. You have to have the right relationships to get these people to vote for your issues. In fact, I would say that it is all about relationships,” Mullis said.

Mullis also noted that the relationship with the local community is how he finds out the issues that matter to his constituents.

“People in Washington, they don’t know how to solve problems. But that’s what we do in Georgia,” Mullis said.
Mullis also spoke about the recent voting bill that was signed, Senate Bill 202.

“What we did was expanded the election process, but made it tougher to cheat. We want to know that you are who you say it are, and you are only voting one time,” Mullis said.

Mullis also spoke about his relationship with Cameron.

“Mike is climbing the ladder quick,” Mullis said. “He has already passed a bill in his first year, and that is a rarity. It’s because he’s working on the relationships that he needs.”

Representative Mike Cameron represents District 1, which is Dade and Walker counties, and started his term in January 2021. Cameron serves on the Agriculture and Consumer Affairs, Budget and Fiscal Oversight and Industry and Labor committees.

Cameron provided Melissa Christiansen Bradford with a resolution honoring her father, Allan Bradford.
“Some of the things we do are to recognize people who have served our community. Allan Bradford was a friend of mine, and a friend of everyone in this county,” Cameron said.

Cameron, like Mullis, spoke about how relationships are an important aspect of the job.

“I spend time talking to people, building the relationships we’re going to need for the future to help our community,” Cameron said. “Previously, people would get along, even across the aisle. Now there is so much acrimony. We run into protesters almost every day.”

Cameron also spoke about some recent legislation.
“We cut taxes this year. It was $150 million. We got a call from Washington saying that we couldn’t cut taxes. Yes, we are cutting taxes. We have problems with people trying to bully us and telling what we can or can’t do from a federal level, but we’re going to do what’s best for Dade and Walker counties,” Cameron said.

Cameron continued, “The election bill was obviously controversial, but it shouldn’t be. It’s common sense things. We have a representative on the election committee, who would come to our office, and we would tell him what our concerns were.”

“The bottom line is this, we are going to represent your values and your views,” Cameron said.

Both Mullis and Cameron had to go to Atlanta later that day to sign legislation. The bills include Senate Bill 42, which will allow home schooled students be able to play public school sports if they take one in-school course, Senate Bill 47, which expands eligibility for students relating to the Georgia Special Needs Scholarship Act, and House Bill 128, which will prohibit providers from discriminating against potential organ transplant recipients due solely to the physical or mental disability of the potential recipient.