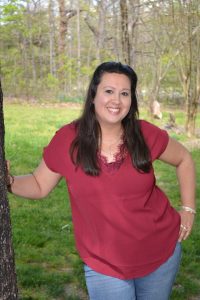 Melissa Christiansen Bradford is the interim commissioner for District 4 Lookout Mountain. She takes over the position after the passing of her father, Allan Bradford. Bradford will hold the position until November, when an election will be held.

Bradford told the Sentinel about herself, her family, what she enjoys about Dade County, and her time so far as commissioner.

Bradford’s parents, Allan and Kathy, moved back to Allan’s hometown when Bradford was in kindergarten.

“I got married and moved away for a few years, then my husband Chris Christiansen and I brought our family back to Lookout. We have three boys: Everett, 17, Carter, soon to be 15, and Cash, 12,” Bradford said.

Her sons attend Dade County schools, and they are all active in sports. The family lives in her grandfather’s house, where Allan grew up.

“I have a small farm and love the animals,” Bradford said. “I love raising my three boys in Dade County. They are able to fish, ride dirt bikes, and be in the woods. I love how Dade County is one big family.”

Bradford says that her goal as commissioner is to “bring a fresh perspective with a commitment to serve everyone in the county.”

The local issues that are the most important to her are public safety and growth that best serves the interests of the people of Dade County.

During her first month as commissioner, she has gotten to work on many issues, and has been at different county events.

“Being the District 4 Commissioner from Lookout Mountain, I have found more and more traffic on Scenic Highway 189 and have been working with the state to fulfill the need for better pedestrian signage at Cloudland Canyon trail heads going across scenic Highway 189,” Bradford said.

Bradford continued, “I am excited by the engagement we had with the recent Tire Amnesty day, and am working on similar programs to help keep Dade County beautiful.”

Regarding new programs, and improving general road conditions, she is looking forward to announcing more details in the near future. She said she is also getting familiar with the operations of the transfer station and recycling.

Bradford decided to become interim commissioner because she felt comfortable doing so, saying that she was by her dad’s side for many years as he fulfilled his duties to the county.

“I could not be any more proud,” Bradford said about following in her dad’s footsteps. “My dad left a large legacy for my family to continue. I am so humbled to have this opportunity to serve. I feel if I can live my life as he did to serve the county and its people, he would love that.”

Smoke on the Square

Dade Residents Are Encouraged To Apply For Dislocated Workers Grant

Qualifying For District 4 County Commissioner Is In Two Weeks