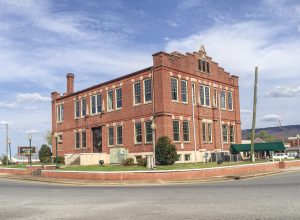 REBECCA HAZEN/Dade County Sentinel
Structural work has been completed in the historical courthouse. An LLC has been formed, the State of Dade Historic Preservation, which will handle upcoming money for the project. People are encouraged to sponsor the purchase of windows and sections inside the building.

The Dade County Board of Commissioners heard about the ongoing construction projects to prepare the historical Courthouse for reopening during the Thursday, May 6 meeting.

“They are ready for the rough-in phase. [The phase where mechanical, electrical, and plumbing lines are brought in.] There has been a lot accomplished. What I am asking is are we at the point to talk about maybe having a construction management company to help us do this in a timely manner,” Lowery said.

“We just finished the structural improvements at the courthouse. We do have some familiarity with the building. From a construction management perspective, the way to look at that set up is that you are looking to hire us to run all of the management aspects of the project. We would be managing the process to make sure that bids are received and schedules are met,” Blevins explained.

The Commissioners did not make a decision during the meeting to hire a construction management company.

Donna Street, Chairperson for the Historic Preservation Commission, noted that they have been thrilled to finish the recent project at the courthouse, which repaired the superstructure.

“We are looking forward to getting starting on actually working on the inside,” Street said.

Street continued, “The construction management idea is a good idea because, I don’t know how to bid a job. And there is plenty of work for the employees that we already have. I trust the Blevins.”

Street noted that they were going to form an LLC called the State of Dade Historic Preservation.

“Right now all of the money that comes to us is not coming to an organization that is officially aligned with the government. It is coming to the Historical Society,” Street said.

Once the rough-in work is done, a campaign will be started to raise some more funds. There are opportunities for doors and rooms to be sponsored and named.

“We still have about seven or eight windows that have not been claimed. If someone wants to honor someone, they can,” Street said.

It costs $1,000 for the large windows, and $500 for smaller windows. There will be little plaques under each one.

When the work is all completed, Street said that the building could be used for rentals and other activities.

In other news, the Board also approved proclamations designating May 15 as Armed Forces Day and May as Foster Care Month.

“Right now we have 32 kids in foster care, and luckily we have been able to maintain all but two in the community, by using friends of the family and family. We are really focused on keeping kids in their legal county and schools. The workers down there do an amazing job,” Kathy Johnson, director of Dade County Division of Family and Children Services office, said.

Commissioners approved a new concrete pad/parking area for the Trenton Fire Station/EMS building to be paid with SPLOST funds. The commissioners accepted the bid of $48,000 by Newt Palmer, located in Rising Fawn.

The commissioners also had a second and final reading of Ordinance No. 05-06-21, which amends tobacco use in the county park to include no vaping. They also had a first reading of Ordinance No. 06-03-21, which amends the Special Use Permit Board Ordinance so that the Commissioners no longer have to designate a chairperson, and the members of the Special Use Permit Board can do it themselves.

The commissioners also heard from Don Townsend about the 2022 budget.

Townsend noted that normally they would have a first rough draft by now, but they will have it hopefully by May 20. A draft budget will be proposed to the Commission by June 3. On June 9 a public hearing will be advertised to be held on June 17.

Commissioner Phillip Hartline reported that recreation baseball is currently ongoing, but there have not been any tournaments yet due to rain. Five trees out of 59 that have been planted in the area have died. People are allowed to set up for the U.S. 11 Antique Alley Yard Sale at the Sports Complex today, Wednesday, May 12.

Commissioner Melissa C. Bradford reported that 2,305 tires were collected during Tire Amnesty Day on May 1. Bradford noted that the number is less than usual, but she thinks that may be because the county is getting cleaned up. Bradford also said that there were 871 tons for the month at the recycling and waste transfer station. There were 380 work orders for the road department.

Bradford noted that she had gotten some questions about recycling. Things that can be recycled include newspapers, cardboard, #1 cola cans or plastic, #2, which is milk jugs, aluminum cans, metal cans and batteries.

Rumley thanked the Alliance for holding the lunch and learn legislative update, and he said he hoped that they would hold more in the future.

Rumley also thanked the commissioners and other volunteers who helped out and worked during Tire Amnesty Day. Rumley said that there were a lot of people who have larger truck and tractor tires, and that hopefully the county can work something out with the state in the future to have a Tire Amnesty Day event for the larger type tires.

Commissioner Robert Goff was absent because he was in Atlanta to attend a bill signing by Governor Brian Kemp.

Alison Henderson, Dade County 4-H Extension Educator, reported that there was a livestock showing interest meeting held in April, and the number of 4-H’ers showing goats this season has grown to five, up from two.

Henderson also noted that the next meeting of the Tri-State Cattlemen’s Association would be May 18 at 6:30 p.m.

George Williams, chair of Alliance for Dade, also spoke to the commissioners. Williams reported that there are 70 investors, or members, in the Alliance.

“We are growing an inch at a time,” Williams said.

Alliance Live is on-going, which is a series where Alliance members interview different businesses in the county. Guthrie’s and the Tri-State Food Pantry have been interviewed so far. The videos can be watched on Dade County’s YouTube Channel and on the Alliance’s website, alliancefordade.com.

Williams said that the lunch and learn held earlier that day was a success, with 73 people attending.

The next Board of Commissioners meeting will be June 3.