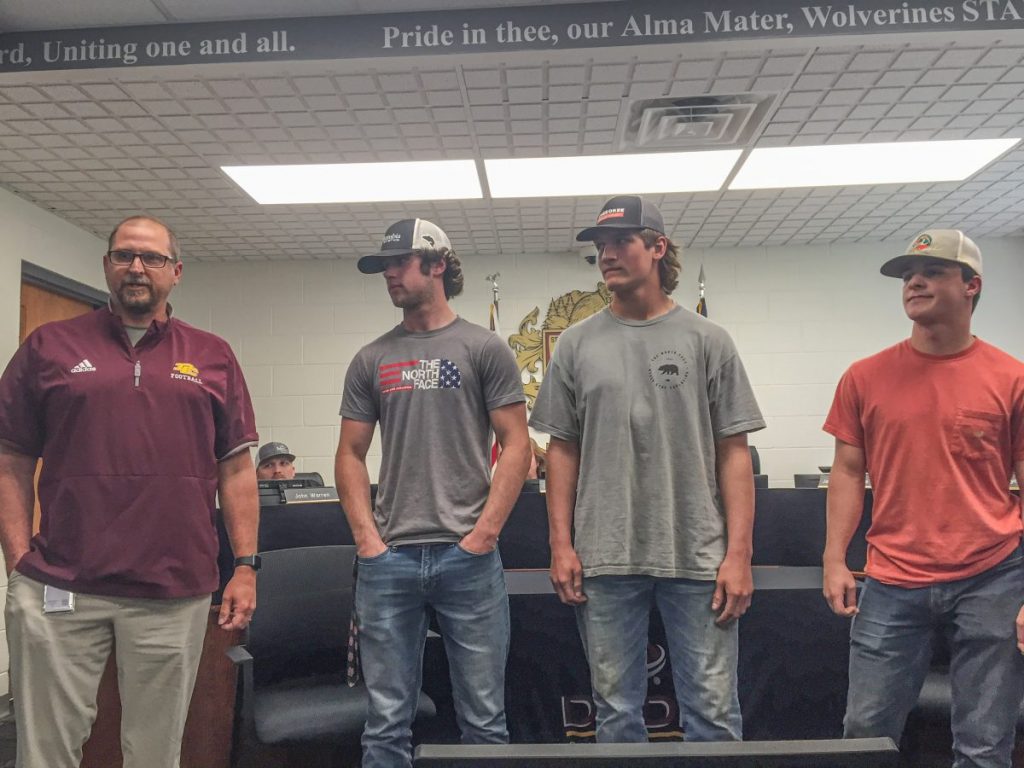 REBECCA HAZEN/Dade County Sentinel
Wrestling coach Jeff Poston, left, speaks about the wrestling team. Poston said that five team members placed at state. The team was honored at the Board of Education meeting.

The Dade County Board of Education heard three State of the School presentations for Dade Elementary School, Dade Middle School and Dade County High School during the March 22 meeting.

Principal Tracy Blevins spoke about Dade Elementary School. According to Blevins, there are 740 students in the school, 66 of those are virtual. There is a 96 percent attendance rate. 60 percent of the students receive free/reduced meals. 13 percent are in special education.

The average College and Career Ready Performance Index (CCRPI) for DES is 83.6.

Blevins noted that there are three district improvement goals. The first goal is student achievement and development.

To achieve this goal, DES has implemented things such as weekly STEM challenges, increased usage of the Media Center and i-Ready Benchmark Assessment.

Blevins reported that in the winter of 2020-2021, i-Ready data shows that more students are in Tier 1 for reading and math, than in the fall.

“Face to face instruction is crucial,” Blevins said, noting that the difference is due to students being back in school.

The second goal is a safe and inspiring climate. To achieve this goal, DES has implemented things such as weekly character words and winners, inside and outside security cameras, a Centegix badge system and student service projects.

Principal Michelle Doane-Beeler spoke about Dade Middle School. According to Doane-Beeler, there are 467 students enrolled in the school. There is a 95.53 percent attendance rate. 51.83 percent of the students receive free/reduced meals. Fifteen percent of students are in special education.

Doane-Beeler said that focus is on academics, arts, athletics, engineering and character.

“Our CCRPI shows that we have a lot of room for growth, but I think that once we are all back in school, next year, we can look at that data to be our baseline,” Doane-Beeler said.

To achieve the goal of student achievement and development, DMS is enacting things like essential questions, word walls, graphic organizers and anchor charts.

“I think what we do really well is real world connections,” Doane-Beeler said.

Students participate in mock elections, in-house televised announcements and are in a partnership with NASA.

DMS has weekly newsletters, a parent advisory board and parent surveys and workshops to achieve the goal of stakeholder engagement.

“The success of DMS is directly related to our students, staff, superintendent, community and the support of our Board of Education,” Doane-Beeler said.

Principal Jamie Fahrney spoke about Dade County High School. There are currently 635 students enrolled, which is a 13.2 percent increase since 2018. There are 186 students participating in virtual learning. Average daily attendance is 95.2 percent.

There have been 600 student and 32 teacher and staff quarantines, and 45 students and eight teachers and staff with positive COVID-19 cases.

Discipline statistics show that there have been 96 referrals on the year, and aggressive behaviors are down 80 percent over the past three years.

Graduation rate is up seven points to 87.1 percent. Fifty–four percent went on to post-secondary education.

Fahrney noted that a nurse has been hired.

“We haven’t had a nurse here in the past and adding nurse Stephanie Shupe has been a Godsend, especially with all of the quarantining,” Fahrney said.

The CCRPI score for the DCHS has moved up nine points in two years. Scores in all four content areas, English, math, science and social studies, were up.

“We met or exceeded 15 of 16 improvement targets,” Fahrney said.

In other news, the Board of Education was recognized in honor of School Board Appreciation Week, which is March 15-21 in Georgia.

“This year I have worked closely with all the schools in helping to develop a close partnership with Georgia Hope,” Barrett said.

Georgia Hope will help provide counseling services for the students.

Barrett noted that they have six mental health agencies that they regularly refer to.

Barrett also held a mini professional development event at the high school in February with all the teachers.

“We talked to the teachers and said ‘If your kids are exhibiting any of these signs, please make a referral,’” Barrett said.

According to Barrett, the idea and implementation of a staff referral form came from this professional development

event. She will be speaking to the other schools to implement a staff referral form there as well.

There have been 150 home visits this year, not including visits at the different schools. The majority of the home visits have been to check on virtual students.

Barrett is working with others to develop a list of resources in the community, whether it is mental health or special needs resources.

“We are going to put this list together and put it on the website hopefully by next year,” Barrett said.

Barrett also reported that there were 28 referrals to the Division of Family and Children Services.

Director of Academics and Testing Patti Johnson spoke to the board about MAP (Measure of Academic Progress) Assessment.

MAP Assessment is used in Georgia for math, reading language and science. Out of the 17 districts in Northwest GA RESA (Resident Educator Summative Assessment), 14 districts are using MAP Assessment. Dade County is not.

“This will tell teachers exactly where the students need to be academically on the continuum,” Johnson said.

Johnson noted that the elementary schools currently use i-Ready, and MAP could possibly take its place. The middle school currently does not have any assessment tools.

“We are just doing a trial run to see how it matches up with i-Ready. Is it something we want to use in the future, do we want to use them together,” Johnson said.

Johnson said that the initial plan is to use MAP Assessment in the spring for grades 1 and 2 to evaluate for gifted services.

MAP Assessment could be a possible replacement of Georgia Milestones Assessment System, which are tests for grades 3 through high school.

Dr. Cleta Long gave an update to the board about the Media Centers. Long noted that furniture will arrive on April 6, and she anticipates that it will take as many as 10 days to get everything put into place.

Ingle reported that the E-SPLOST referendum vote was 525 to 166.

“Thank you for everyone in the community that voted for the E-SPLOST. We will continue to be good stewards of taxpayer’s resources,” Ingle said.

Members of the wrestling team were also recognized and given pins.

“This year was the first year we won traditional area since 1999,” Coach Jeff Poston said. “It was the first time ever that we won area duals, and we finished as state runner-up in area duals. We had five kids who placed in state.”

The Board went into executive session at the end of the meeting to discuss personnel and property.

The next Board of Education meeting will be April 26.