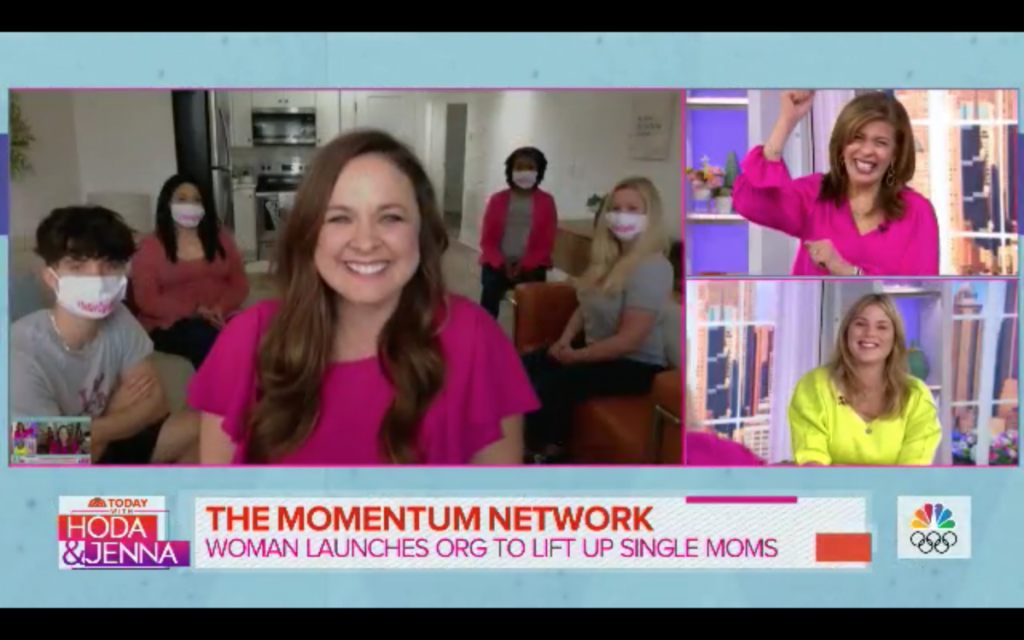 Contributed photo
Cara Hicks, her son, and other members of The MOMentum Network appeared on the TODAY Show on March 11, where they were surprised with a $10,000 donation from Amazon.

It takes a village,” Cara Hicks always says. The MOMentum Network, a Chattanooga based nonprofit organization, brings together resources to help single mothers be successful through college.

Cara Hicks, the founder and CEO of The MOMentum Network, knows how important it is to have a team of people who want the best for you.

She went to a women’s center in Knoxville, where she was told that two percent of teen moms graduate from college.

“I remember feeling so hopeless and so overwhelmed by the statistics. I remember sitting there in the clinic and felt like, ‘I can’t do this,’ but ‘I can do all things through Christ who strengthens me.’ I feel like the Lord said ‘Get up’ so I left,” Hicks said.

Hicks did go to college, and she notes that her mother, also a single mom, was resourceful, which helped out.

Hicks lived in campus housing and made friends with her next door neighbor, who connected her with the campus ministry.

“My village just came together to fill the holes in my crazy story,” Hicks said. “I really am so thankful that they said, ‘Oh, we’ve got this.’ I look back and I see how the Lord provided when I was thinking that I had to do it all on my own.”

After graduation, Hicks started out in the real estate industry, where she saw that housing, along with an education, was a pathway out of poverty.

“I went through my path and saw specific ways that people helped me and I wanted to do that for others, especially for single moms,” Hicks said.

When Hicks’ son turned 10, she shared her story. After that, she had several people reach out, asking if she could connect others with different resources.

“I felt this calling growing, until I started this in 2013,” Hicks said.

She started with pulling resources together. She had a dream of a ‘momplex,’ which would be a building where women could come together.

“Baby step by baby step there were different connections, but I still knew we needed to build a village,” Hicks said.

Hicks noted that the beginning years were challenging, because the moms were spread apart, from Dade County to Soddy Daisy. She knew that they needed to be pulled together somehow so they could be a help to each other.

Resources lead to more resources, and now The MOMentum Network headquarters is located at 1152 Lincoln Park Lane in Chattanooga.

“Any single or expectant mom who is highly motivated to complete college, we encourage them to reach out to us, and then we take each case on an individual basis,” Hicks said.

The MOMentum Network’s core program is the residential development program, called the Scholar Village, where moms and their children live in apartments, which are close by to the main building. The apartments are close to both UTC and Chattanooga State.

The moms pay no more than 30 percent of their income for housing costs. There is also childcare on site. State vouchers can be used to cover the cost of childcare. Each mom that lives there gets to come to coaching and classes at least twice a month.

There are currently seven apartments. Each mom gets a two-bedroom apartment, which they can stay in for the duration of their time at college. After a mom stays in the residential program successfully for a year, she can take a housing voucher and move anywhere else for an affordable rate, while still accessing the network’s resources.

“We still serve moms non-residentially, but we can serve them better, together,” Hicks said.

Hicks hopes to acquire more housing in the future. There are four lots that they are looking at purchasing and building on.

“They were incredible. Their team was so great. They made us feel so comfortable,” Hicks said.

The MOMentum Network was surprised during the TODAY Show airing, by an announcement that Amazon was giving them $10,000, plus gift cards for all the women living in the Scholar Village.

Hicks noted that multiple people have reached out to them following the television segment, wanting to start their own MOMentum Network in a different city.

“The majority of the response came from outside our community. We saw a lot of encouragement. A lot of people shared their stories,” Hicks said.

Going forward, Hicks said that their biggest goal is to continue to strengthen the village by increasing the amount of partners.

Any business owner who could offer discounted services is welcomed, such as a dentist or a mechanic. Childcare help is also needed for the summer months.

People can also be one-time or long-term mentors.

“Having that support network is a huge goal of ours,” Hicks said.

Hicks continued, “We have an opportunity to change two generations when we are kind and seek to understand,” Hicks said.