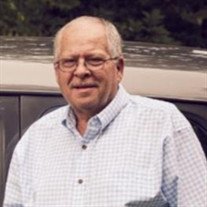 Dade County Commissioner Allan Bradford passed away March 23 from a long-fought battle with COVID-19.
Community members and friends remembered Allan, spoke about what kind of a person he was, and how they will miss him.

“Allan is a PR person. He’s never met a stranger. He’s going to be really missed because he contributed a lot to us,” Rumley said. “He was in here for the right reasons. Just a good guy.”

Rumley noted that Allan’s family goes back generations in the county, and that he knew Allan almost his whole life.
“It doesn’t seem like he should be gone at all. I feel like he’s going to be coming in here any minute,” Rumley said.

Rumley also said that Allan was always helping veterans, such as helping put roofs on their houses if they couldn’t afford it.

“He was an intricate part of the Legion. Anything that needed done, he would do it, if he could,” Moore said. “If you called him, he would say, ‘Yeah just give me a day and I can get to that.’”

Moore said that Allan was a really good friend, and that he talked to him at least twice a week.

Moore also said that if the Legion building had any problems with their gas, Allan would fix it.

“That saves you money when you have someone like that,” Moore chuckled.

Allan worked at Suggs Propane Gas Co. for over 25 years as a route salesmen, a serviceman and a deliveryman.

David Pace, an employee at Suggs, said that he worked with Allan for about 18 years.

“He was a dear friend,” Pace said. “He was a very good employee. He was wonderful. He was very polite and he made everyone feel like they were family.”

Pace continued, “He went out of his way to help people. He was an all-around good person. His boss, Mr. Suggs, and the Suggs family, loved him very much just like he was family.”

Rodney Ross, Fire Chief for the New Salem Fire Department, said that he and Allan always worked closely together, due to the nature of their jobs.

“Allan was very active in community events. I don’t know how else to say it, but he was a good guy,” Ross said.

Ross noted that they both live in the same community, and he grew up with Allan.

“Allan was just that type of person that you couldn’t help but like,” Ross said.

Commissioner Robert Goff said that he had more of a personal friendship with Allan, opposed to just a working, political relationship.

“He was able to drop by the commission office a lot after his retirement and we had a lot of good conversations. He thought the world of his grandkids,” Goff said.

Goff noted that even though Allan was technically retired, he still helped out at Suggs.

“I would ask him sometimes, ‘Aren’t you retired?’ If a friend called him and said, ‘Could you look at my heater,’ he would come,” Goff said. “He was known just as much in the county for that as he was for commissioner.”

Like Rumley and Moore, Goff also said that Allan worked with veterans.

“He worked very hard for the veterans to have a voice in Dade County and give them some type of recognition,” Goff said.

“He has been a part of so many people’s lives. I will surely miss him,” Goff said.