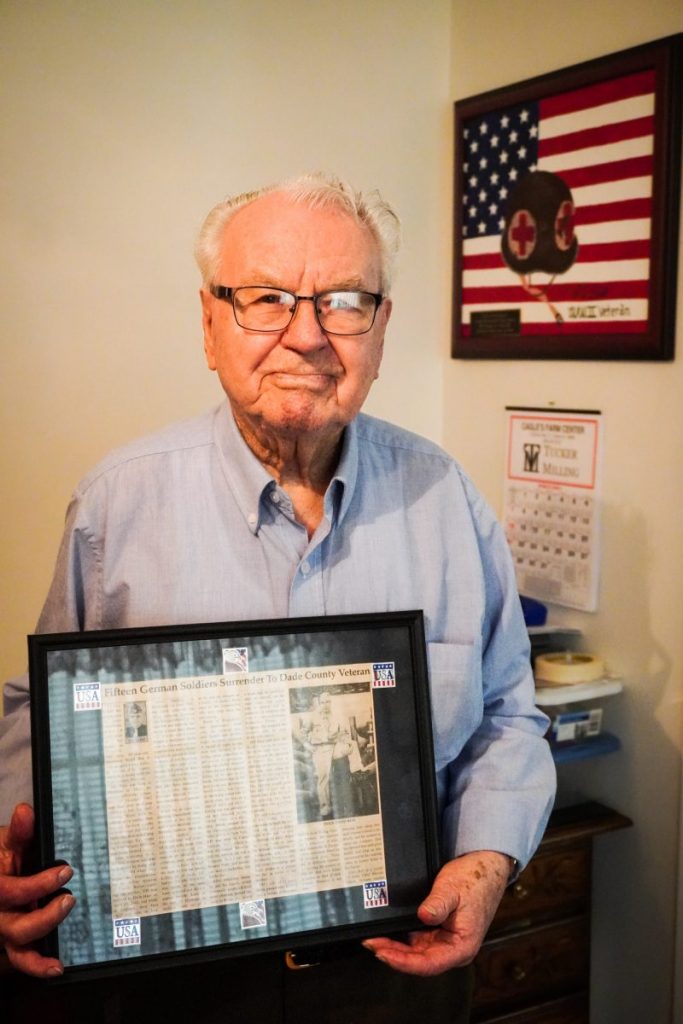 Contributed photo
D.D. Bain, a World War II veteran, has had a song written about his time in the war, by songwriters with Freedom Sings USA.

Songwriters, members of Freedom Sings USA and local World War II veteran D.D. Bain gathered over Zoom on March 15, to hear a song that the songwriters wrote for Bain.

Don Goodman and Steve Dean listened to Bain’s story last month, about his time as an Army medic in Europe, and then they put the song together. Goodman wrote the lyrics, and Dean composed the music.

Freedom Sings USA is a Chattanooga based non-profit that pairs veterans with songwriters. The songwriters interview the veterans, and then write a song about that veteran’s experiences.

The title of Bain’s song is “The Knight of Dade County.”

Some of the lyrics of the song include:
“…I was born on Lookout Mountain in 1921
I’d never been far from daddy’s farm
‘til a letter came from Washington.
I found myself on a troop-train in the winter of ‘43
Then we set sail for England
And crossed the Channel to Normandy
When I survived the carnage on the sands of Omaha Beach
I knew in my heart
God had his hand on me.”
The song ends:
“Now I live alone, with the love I’ve known, down through the years
A century of memories, photographs and souvenirs
A grateful heart, two bronze stars, and the French Legion of Honor
And this local paper … where they crowned me …
The Knight of Dade County.”

“I appreciate your willing to do this. You did a good job on it,” Bain said. “I never thought about ever writing a song. Thank you so much.”

“Thank you sir for your service and for allowing us to write your song,” Dean said.

The song, once recorded, will be available to listen to at freedomsingsusa.org. The song will eventually be put on a CD, along with other songs. The CDs can be downloaded, with a donation.