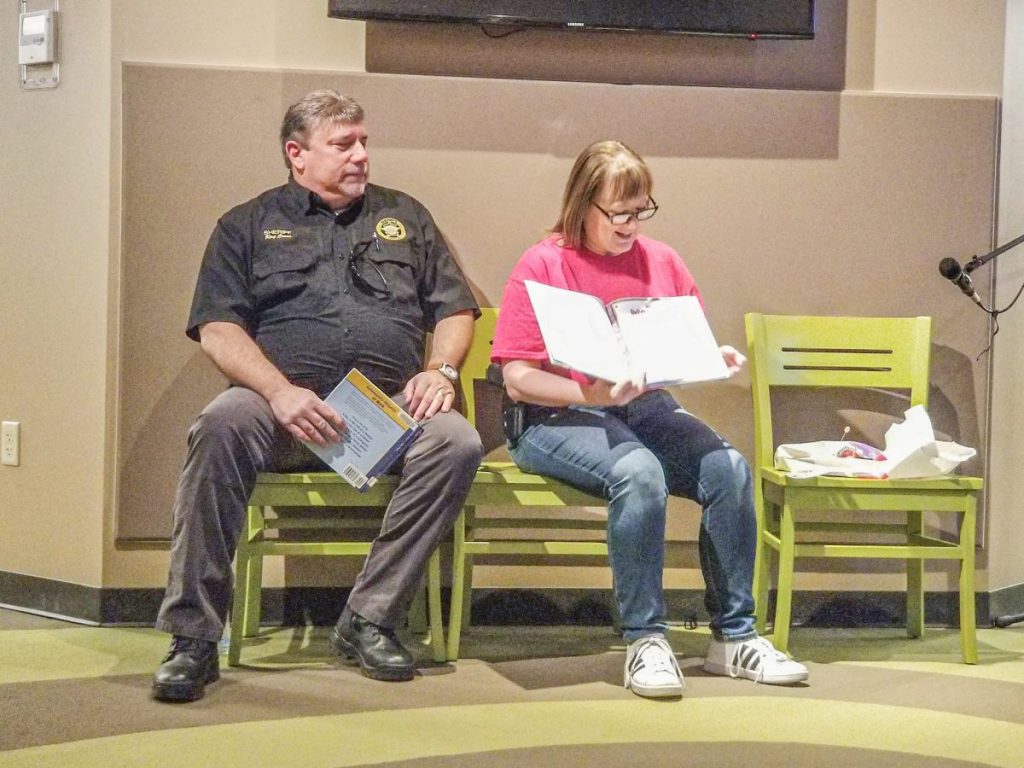 Contributed photo
Sheriff Ray Cross and Cyndi Thurman, from the Sheriff’s Office, read during the 2019 Read to Lead event at the Dade County Public Library. This year, readers will be recorded and can be watched online.

Some of Trenton’s well-loved spring time events, Read to Lead and the Blue Ribbon Glow Run, will not be able to be held as they were intended, due to COVID-19. However, different events will be held in their place, to ensure that the purpose and the goals of the original events are still the same and are being achieved.

Read to Lead is a celebration for National Reading Month, held at the Dade County Public Library.

As part of the event, local leaders, such as the sheriff, mayor, and school principals would all come to the library and read to kids.

“It was planned for March 24 last year and the world closed down on March 13. There was not enough time to pivot then. This time we are going to pivot,” Martha Baker, with Dade First Family Connection, and coordinator of the events, said.

Baker continued, “Unfortunately we can’t be together, but we still wanted to do something.”

This time around, community leaders will still read books, but the readings will be recorded. The recordings will be uploaded to the library’s Facebook page. The videos will also be on KWN and YouTube.

Each of the readers will give a code word. If the kids listen to the story, and then come to the library and say the code word, they will receive a goodie bag. The pick-up dates for the goodie bags will be March 25-27, and the reading videos will be posted all that week, March 22-27.

The theme of the books will be Under the Sea. There will be a small section of the library decorated with Under the Sea related decorations, and the kids can also take home a theme related craft.

“The goal is to encourage literacy and the importance of reading. These are little ways that we can encourage that,” Baker said.

Different booths, both inside and outside of the library, would also have been a part of Read to Lead, but unfortunately there will not be any booths this year.

Another popular event, the Blue Ribbon Glow Run, which is usually held in April, will not be held. The Glow Run is held to bring awareness to child abuse. April is designated as National Child Abuse Prevention Month

“Last year we had over 1,000 people attend, and we had about 30 agency booths, all giving out glow swag. It was iffy if we could have a gathering that size,” Baker said.

The reason why the event is a glow run is because the theme is “Through the Broken Pieces, the Light Will Shine.”

“This year we can’t bring people together, but we just wanted to do something with prevention and awareness being the goal,” Baker said.

National Blue Day, for Child Abuse Prevention and Awareness, is on April 14.

“We are joining in on that effort locally, and we’re going to ask the community to wear blue,” Baker said.

In addition, pinwheels, the symbol for child abuse, will be planted around the courthouse, along with facts about child abuse.

The schools will also participate by having an art contest.

National Title Pawn will hold a scavenger hunt. Once a week, they will leave a clue and take a picture and post it on social media.

“We will provide a grocery gift card as the prize, and include information and resources for child abuse and prevention,” Baker said.

Baker hopes to continue these events in addition to the Glow Run for next year.

“So many people were looking forward to these events. I am happy that we are still able to do something,” Baker said.