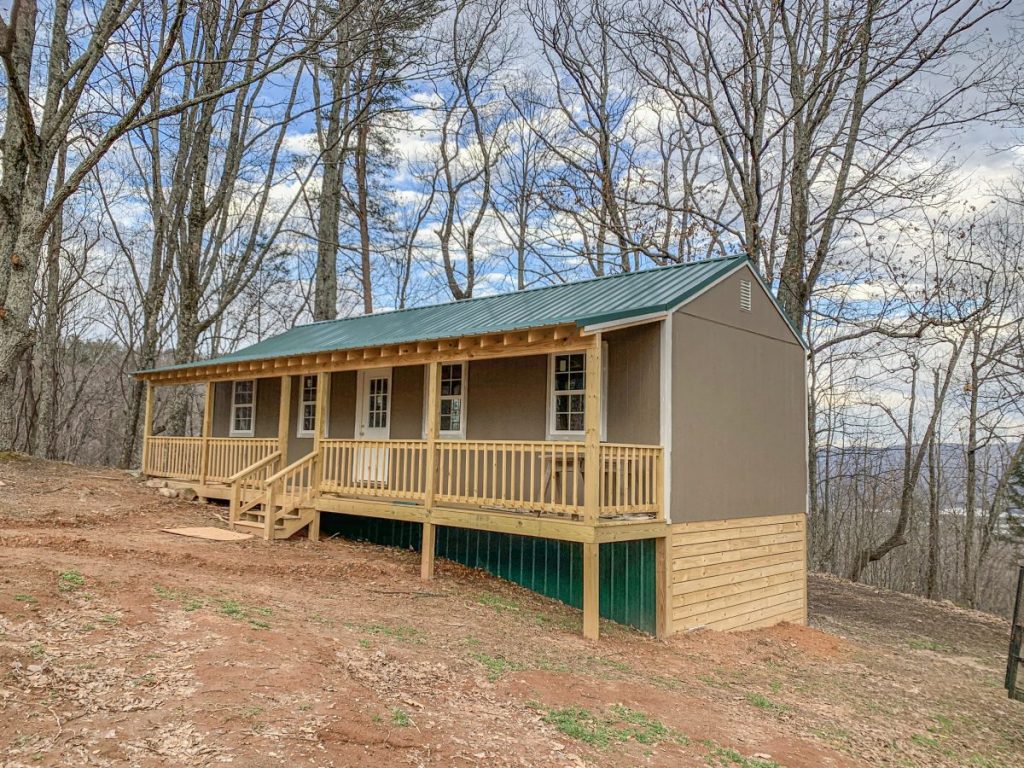 Contributed photo
A Hand Up Ministry is in the process of building transitional housing at the ministry’s campus on Sand Mountain. Each cabin will have room for four people, with space for a kitchen and laundry room. The cabin is almost finished, and is being worked on as money is raised.

A Hand Up Ministry, a faith-based ministry for people who have recently left the prison system, is in the process of building transitional cabins for the people who go through the program.

There is currently a main house for people to stay at A Hand Up’s 100–acre campus, originally owned by Bob Gault, located on Sand Mountain. There are also two rented houses in Trenton for both men and women, owned by Bart Brannon and Tammie Chapman, respectively. Currently there is bed space for 10 men and four women.

One cabin is almost finished, and it is being worked on as money is raised for the project. So far, over $12,000 has been raised.

Each cabin will have bed space for four individuals each, and will include a kitchen and a laundry room.

The program lasts 12-18 months so transitional housing is a necessary part of the process.

“We’re going to put in as many as the need arises,” Rex Mayo, Founder of A Hand Up, said.

The first cabin will be a men’s cabin. Mayo hopes to have women’s cabins at the campus in the future. He also hopes to turn the majority of the main house into operational space.

Recently, A Hand Up was the recipient of $500 from Pay It Forward, with News Channel 9.

According to Mayo, one of the ministry’s board member’s wives applied.

“They showed up on Thursday night, Celebrate Recovery night. I said, ‘Why is there a guy with a camera here?’ It was pretty wild. It was all done without me knowing anything,” Mayo said.

Mayo noted that the Pay It Forward recognition has helped spread the word about A Hand Up’s cause.

“We have heard from people from as far as Texas and Florida,” Mayo said.

According to Mayo, the ministry is an all-volunteer staff, with just one person working part-time.

“We have got to increase the revenue. We accept donations,” Mayo said. “We need a place for them to go, a safe place, while we bring the support and resources around them.”

It can be tough to find housing. A lot of them may not have driver’s licenses, and ID is needed to apply for housing. Not to mention application fees and deposit fees.

Mayo continued, “I still believe in America, the system is the greatest system, but there are still some holes in it. That is what I see us doing. We are filling some holes. These people are not going to make it without somebody giving them a hand up.”

People who are a part of A Hand Up Ministry go through Freedom Celebrate Recovery, which is a Christ-centered 12-step program.

There is also Sunday morning worship at Trenton Ministry Center and family discipleship on Wednesdays.
On Thursday nights there is Celebrate Recovery, which is worship time, and time for testimony.

“They don’t necessarily have to be Christian or have a relationship with Jesus, but as long as they are open to that and they are seeking something different, then we will work with them,” Mayo said.

When a new person joins the ministry, Mayo will first help them find a job and open up a checking account.

“When he starts drawing up a paycheck, we control that money. We do give them a percentage of their paycheck on a debit card. Part of the money is for room and board, but we take part of the room and board to help them pay their fees and fines. Room and board takes care of utilities and food,” Mayo explained.

A percentage of the paycheck is also set away in a transition fund, to help them afterwards. They have to complete the program in order to gain access to those funds.

“That is a little incentive to help people stay, because it’s not easy,” Mayo said.

Becoming a part of A Hand Up does not cost anything. Mayo has never charged application fees.

Before starting A Hand Up, Mayo was chaplain for inmates.

“A guy put his hand on my shoulder and he said, ‘Mr. Rex, I want to change my life, is there anywhere safe that I can go in Dade County? I don’t have anywhere safe to go.’ I told him, ‘No, but I will pray for you.’ I couldn’t let go of that,” Mayo said.

He really wanted to help, but didn’t see himself as the lead person. But he started talking to people and, “One thing led to another.”

“We might not be able to do everything, but we can connect them with someone else.”