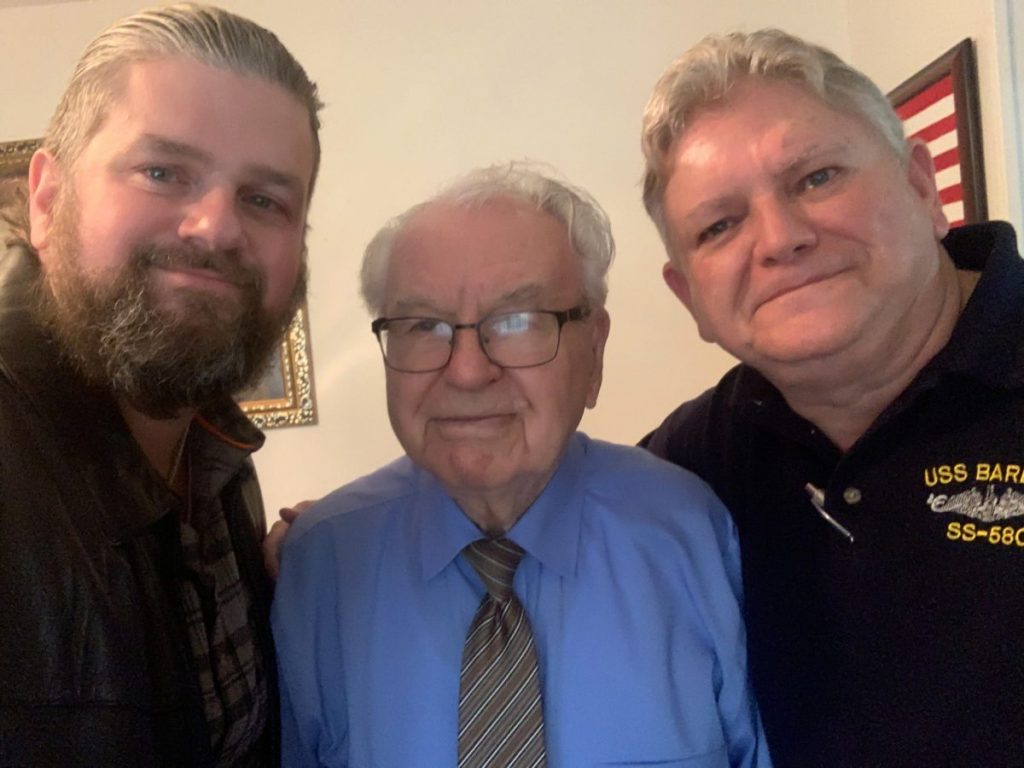 Songwriters and members of Freedom Sings USA had the chance to listen to local veteran D.D. Bain tell his story about his time during World War II.

Freedom Sings USA is a Chattanooga, based non-profit that pairs veterans with songwriters. The songwriters interview the veterans, and then write a song about that veteran’s experiences.

“I have been here for seven years and I’ve written about 200 songs. You can listen to two guys who were in the same place at the same time tell two different stories,” Goodman said.

Bain, who is set to turn 100 this October, said that he loves any kind of gospel music, so Goodman, and another songwriter, Steve Dean, will turn his story into a gospel type song.

Bain was born in 1921. He was born on Lookout Mountain near Ft. Payne, Ala. He attended the Mentone Church of God.

“What did your momma think?” Goodman asked.

“She was disappointed, three of her boys were drafted,” Bain said.

Bain is one of nine children, and him and his two brothers were all in the fight together towards the end of the war.
Bain participated in the Normandy landings in 1944, and landed at Omaha Beach in France, just a few days after D-Day.

“A storm came and caught all of those ships. We got stalled in the middle of the channel. We ran out of food. We had to go back to England and get something to eat. We spent two or three days trying to get ashore. Finally the storm left and we made it to the shore,” Bain said.

Bain continued, “When we landed … that’s where the fight began, and it was rough. The Germans were waiting on us … It was a stop and go battle all the way from the beach to Berlin.”

It took 10 months for his company to get to Berlin. Bain had many close calls during that time, and he shared some of those stories.

“They took the water canteen right off my belt. Just blew it apart. I didn’t even know it for a few moments,” Bain said.

In another instance, a shell, about two feet long and 80 inches in diameter, was coming at him. He could hear it coming.

“I went in a ditch, and that thing hit right beside me. I could have touched it with my hands. But it bounced across the road into the woods and it didn’t ever explode,” Bain said.

He served as a medic in the war, and spoke about some of his medic experiences.

“There’s not a great lot a medic can do, but we would tie up and stop the bleeding if we could. I had to leave them, maybe, or get someone to pick them up and get them back,” Bain said.

Once in Berlin, Bain remembered that 15 German soldiers wanted to surrender to him because he didn’t have a gun, because he was a medic.

“They were afraid of the boys with the guns. That was an experience I didn’t forget,” Bain said.

Bain also spoke of a time when an anti-tank weapon killed eight men in his company.

“The poor boys … They laid there begging me to take their guns and shoot them to put them out of their misery. There was nothing I could do for them. That is something I could never forget. All of my buddies gone at once,” Bain said.

After that, the company commander noticed Bain was in bad shape, and he asked if Bain wanted to go home. At that time they had started rotating the boys out, the ones who had not had any furlough up until that point.

Three days after he left the front, the war ended.

“It sounds like God had his hand on you all the way across Europe,” Goodman said.

Bain received two Bronze Star Medals, as well as the Legion of Honour, the highest French order of merit.

Since then, Bain went back to Europe with one of his sons, 50 years after the war, to see the places where he served.

“It’s such an honor to talk to you sir, to have this opportunity and to get to hear about this,” Goodman said.

Goodman and Dean will get together again in the near future to compose Bain’s song.

To listen to songs that have been completed, and to find more information about the organization, visit www.freedomsingsusa.org.

“What an honor to sit with D. D. Bain and listen to the struggles from Army boot camp, medic training, to Omaha Beach via England. Hearing and listening with my heart and mind, hanging on to every word as he reached Berlin, Germany. Freedom Sings USA cannot wait to put his story to a song,” Terrance Moreland, President of Freedom Sings USA, said.

Moreland continued, “It is a privilege to be a veteran in an organization such as Freedom Sings USA. I am associated with and surrounded by other veterans who share a common goal, to help veterans, active-duty military, and their families reach an emotional balance by sharing their stories, through the creative process of songwriting.”