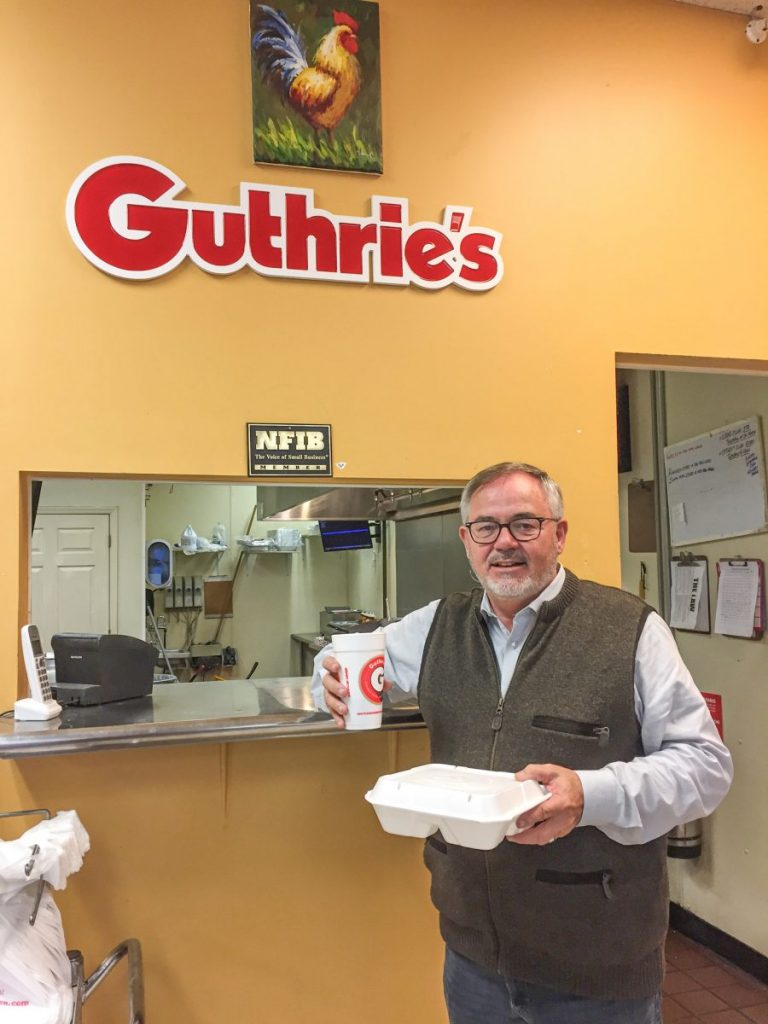 REBECCA HAZEN/Dade County Sentinel
Guthrie’s, owned by Will Garrett, has been in Trenton for 10 years. The restaurant is currently going through a remodel, expected to be completed in early March.

Guthrie’s, the Chicken Finger Restaurant, has been open for business in Trenton for 10 years. The restaurant, located at 5404 GA-136, is in the process of a complete remodel.

“Business has been great,” Guthrie’s owner Will Garrett said. “The citizens and the community has supported us. We try to give them good food and I think we do because they keep coming back.”

The remodel is slowly taking shape, according to Garrett. Each aspect has to be finished one at a time, and much of the work is being done at night.

“We are slowly getting everything in place.” Garrett said. “It will be a whole different look.”

Included in the remodel plans are new tables, chairs and booths. The bathrooms will be remodeled, and there will be a fresh coat of paint on the inside, too. Granite will go on all of the counter tops.

There will also be new drive thru lights and a new awning on the outside.

Garrett hopes for it all to be completed by the first week of March.

“I wanted to make sure my customers had a good place to come to,” Garrett said.

Garrett first heard of, and started eating at Guthrie’s in Tuscaloosa, back in the early 90s.

“I fell in love with the golden fried chicken fingers,” Garrett said.

Garrett said that he wanted to eat there all the time. He ended up eating there two to three times a week by himself, because his co-workers didn’t want to eat there every day.

Garrett loved it so much that he knew that he would own a Guthrie’s himself, and now he owns three of them.

His Guthrie’s originally opened up on Lookout Mountain. Garrett said that business was good there, but it was seasonal because of tourism. After a year he brought the location down to Trenton.

Garrett thinks that this Guthrie’s has been successful because of their good food, which is cooked to order, and affordable menu, but also because he tries to treat people the way they want to be treated.

According to Garrett, the average worker at that Guthrie’s location has worked there for about six to seven years.
Garrett and Guthrie’s has always been involved with and supported the local community. They support the school’s athletic clubs, the band, and the Chamber of Commerce, to name a few.

In addition, churches hold their youth group meetings in the “Wolverine Den” room, as well as the Optimist Club and Lions Club. Birthday parties are held there, tool.

“We have lot of different organizations use that room. It is free, we don’t charge anything,” Garrett said.

What’s next? Garrett says that he’s starting to work on the next 10 years in the community.

“Guthrie’s for me is not just about a restaurant where I make a living. This place truly is, using biblical imagery, a tentmaking for me. It supplies my financial needs so I can make a difference in the community and in a lot of people’s lives,” Garrett said.

Guthrie’s was originally established in 1965 by Hal Guthrie, when he opened up a drive-in restaurant in Haleyville, Alabama. There are over 40 stores, in Alabama, Florida, Kentucky, Tennessee, Georgia and Ohio.