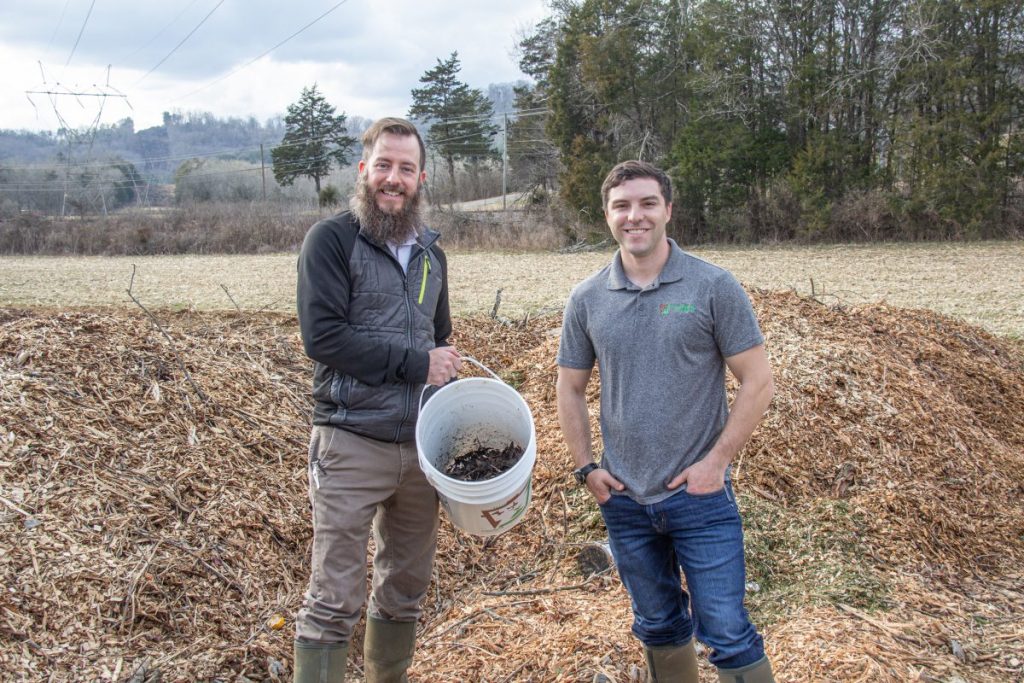 REBECCA HAZEN/Dade County Sentinel
Michael Ryan and Normand Lavoie are the owners of NewTerra Compost. The composting is done on a plot of land in Wildwood. Both businesses and residential homes can sign up with NewTerra Compost.

Did you know that a head of lettuce can last up to 25 years in a landfill? Did you know that the average person wastes 238 pounds of food per year? Normand Lavoie and Michael Ryan, owners of NewTerra Compost, hope to change that in the greater Chattanooga area.

Both businesses and residential homes can sign up with NewTerra Compost.

Restaurants and other commercial businesses are given containers. The filled containers are swapped out once or twice a week for a clean, empty one.

Ryan continued, “As a commercial customer, you also get training and signage. You are spending extra money on the service because you care about it. We want your customers to know you are doing it, and to be successful.”

Some of the local businesses that are using NewTerra Compost’s services include Lupi’s Pizza Pies, Ruby Falls, Base Camp Bar and Restaurant, and Daily Ration.

Residential homes that sign up get a five-gallon bucket. There are two different residential options: drop off kiosks, or a pick up option for certain areas.

Drop off kiosks are currently located at Wildwood Depot in Wildwood, Pruett’s Market in Signal Mountain, and behind Niedlov’s Bakery and Café in Chattanooga. More kiosks are being added. Kiosks are available 24 hours a day.

The containers have locks, which can be opened with a code. This is to prevent people from putting other trash inside.

A residential account costs $15 a month. The pick-up option is $30 a month.

Members receive compost in return in both the spring and fall.

Everyone that does business with NewTerra Composting gets an online account, where they can see how much food waste is being collected.

“Michael has the background in the food industry. I had been deployed in the Tennessee National Guard. Our families got together for dinner. He told me, ‘Do you know about this problem?’ He got my wheels turning,” Lavoie said. “That’s how the business started.”

Lavoie and Ryan started out by composting in their backyards.

“We got into composting because food waste represents a huge portion of greenhouse gases being created in the U.S.,” Lavoie said.

Ryan and Lavoie know each other because their wives are both food scientists.

Ryan, who is from Dade County, said that he started composting by putting three pallets together in his backyard. It started growing from there. He took his neighbor’s food waste as well.

Once the composting effort grew bigger, they then moved to Lavoie’s backyard in Hixson.

“We composted 3,000 pounds in his backyard,” Ryan said. “We’ve been working on this for almost two years. We started off real small.”

The compost is made on a plot of land in Wildwood. The food scraps are first emptied into an old repurposed dump truck bed, which has a layer of wood chips in it.

“We dump everything in there. So there is a lot of liquid that comes out of food when it is breaking down. All that gets captured in the wood chips. We control all of that moisture and we save it,” Lavoie explained.

The compost is organized in piles. The piles are mixed on a regular basis to get nitrogen and carbon to interact with each other. The piles are then stacked on top of pipes, which is hooked up to a blower, which pumps air to get the oxygen to the woodchips.

“It’s a natural reaction. Traditional composters used to take a pitchfork and flip it over and make it happen,” Lavoie said.

The woodchips act like a blanket. A thermometer stuck inside one of the piles read 150 degrees.

“That’s another reason why we put the oxygen in there. It gives the microorganisms more oxygen to keep going. If it gets too hot, it will slow down. If it doesn’t get hot enough, they can’t do the real good work. 140-145 degrees is your sweet spot,” Ryan said. “If you can keep it there for about three days, you kill the pathogens and the bacteria. In a week’s time, it’s not going to look like food anymore.”

“We’re playing with the recipe to make sure we get the right interaction with carbon and nitrogen,” Lavoie said.

“We are also playing with how much air gets put on it. If it gets too hot, we are able to bring that temperature down by running more air through it.”

The compost will eventually be taken off the pipes and screened to take the woodchips out. It will go through a curing process, which takes about 60 days.

“It is super natural. The most unnatural thing is that we added more oxygen,” Lavoie said.

Part of the business model is to sell off the rest of the compost to local farmers, after giving it out to members.

Ryan says that, for a commercial facility like NewTerra Compost, they can compost anything that can be eaten.

To sign up for the composting service, and to find more information, visit www.newterracompost.com.

Ryan noted that most people do not know much about composting until they get into it.

“We can’t really fix the recycling or the landfill problem. But we can divert food and give it another life,” Ryan said.

“We’re on the map for changing the air quality,” Ryan said about the Chattanooga area. “How can we not try to do something else?”