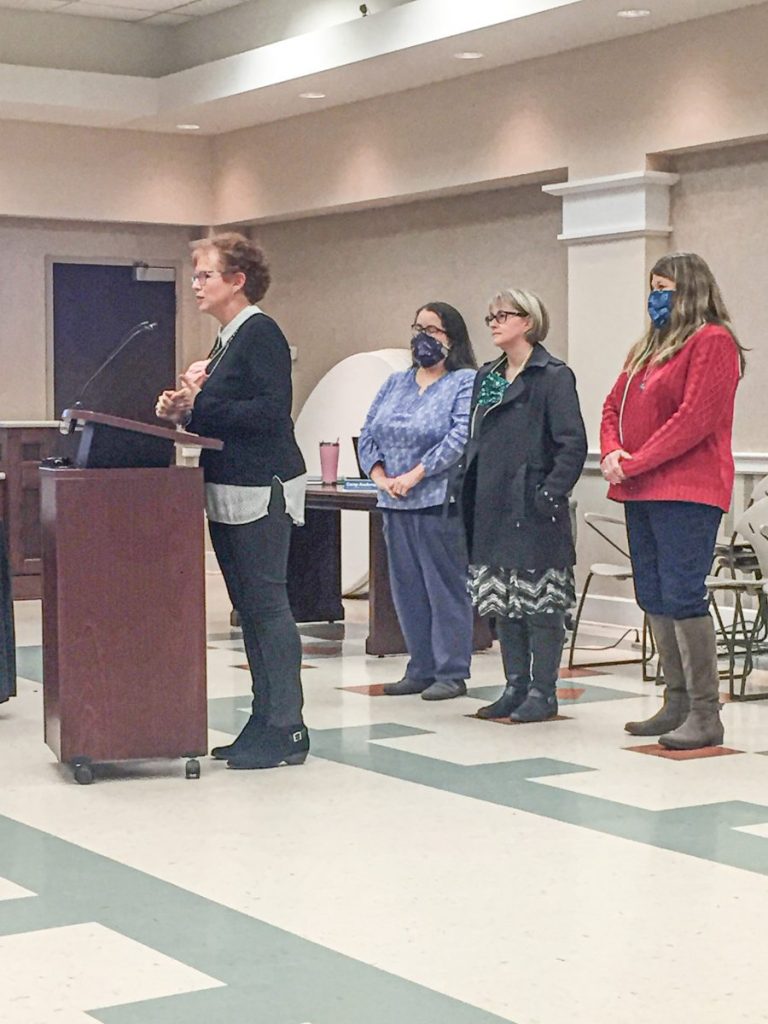 By REBECCA HAZEN
News Editor
Lecia Eubanks, Director of the Cherokee Regional Library System, spoke to the Dade County Board of Commissioners during the Thursday, Feb. 4 meeting.

Eubanks spoke about the Cherokee Regional Library System being named the Georgia Library of the Year, which includes the Dade County Public Library.

“We couldn’t do what we do without the unwavering support we get from the county. You take care of our facility and you make sure we have an appropriation every year that gives us everything we need,” Eubanks said.

Eubanks continued, “It was a hard, year, and 2020 just feels awful special to get it in. We did put a lot of protocols in place and we are going to continue to do that because we know how essential library services are to this county.”

“They are what makes the library what it is,” Eubanks said.

Citizen John Huffman asked the board members to consider providing all of the papers related to the meeting in a packet to community members. Huffman noted that Walker County provides all of the documents, which are also posted online a week in advance.

“The problem is, if we put something out, and there is a change in it, and you don’t get that change, people will come to the meeting and say, ‘You changed it. This isn’t what I have,’” Commissioner Robert Goff said. “As long as they don’t come in and beat us to death of that.”

Board Commissioners agreed to publish the extra documents online, noting that the community needs to understand that changes could happen.

Reece Fauscett and Mike King spoke to the commissioners about putting together a team hub that deals with response, relief and recovery, regarding possible tornadoes and storms in the future.

Alex Case, director of Emergency Services, asked Fauscett and King to go to the churches and ask for commitment to being a part of the hub. So far they have commitment of 19 churches. King, who is pastor at Rising Fawn United Methodist Church, is going to maintain the contact list.

Fauscett noted that the American Legion and a few citizens have also committed.

“You can call on these churches that will house people, feed people, take care of people,” Fauscett said.

“If you’re church isn’t on this list, have your pastor call me,” King said. “We’re looking for people who will step up and help.”

In other news, the board approved the resignation of Joe D’Agostino from the Dade County Department of Family and Children Services Board. Kathy Ragon will be appointed in his spot. Ragon will begin a five-year term on April 1.

The board approved the purchase of copiers for the Administration building, Tax Commissioner’s office, Sheriff’s Office and jail with SPLOST funds, costing $47,921.

Commissioner Phillip Hartline reported that there is dirt being hauled into the sports complex to extend one of the ball fields, to get an older age group of kids out onto the field.

County Executive Ted Rumley reported that concrete has been poured at the Tractor Supply building site, and they are working hard to meet the March 1 deadline, of turning the store over to the workers.

Rumley also noted that the ambulance service switched over to CHI Memorial on Monday, Feb. 1.

According to Rumley, things are going well with the extra workers helping at the Department of Health.
“It really took a load off of them. They are all so appreciative,” Rumley said.

According to Rumley, there have been issues within the last few weeks with trains blocking street crossings.

“We are working with legislators and senators to try to do something about that. We had one road here, Clark St., that train was there on Monday morning and people couldn’t go to work,” Rumley said.

Library manager Marshana Sharp noted that the library received a literacy program grant, and they are looking for families to participate. It will be every Monday at 5:30 p.m. for six weeks. It will start on Feb. 15. The family has to have children aged 6-10. The family will get a box of books and a meal. Give the library a call at (706) 657-7857 for more details.

The Library is also partnering with Dade First Family Connection to hold a Parent Café on organization, on Thursday, Feb. 25.

“We are really seeking people from Dade County, who love Dade County, who will step forward and say I want to be a volunteer. There are a lot of committees that people can be on,” Dixon said.

Dixon also noted that the Alliance is partnering with the Optimist Club to hold the annual Oratorical Contest. This year’s contest will be Feb. 19, on Zoom.

Sarah Dyer with Dade County’s UGA Extension reported that S.A.F.E. Shotgun team sign-ups will be held on Tuesday, Feb. 16 and Thursday, Feb. 25 at the Ag Center from 6 to 7:30 p.m. There will not be BB and .22 teams this year.

The next Board of Commission meeting will be Thursday, March 4.