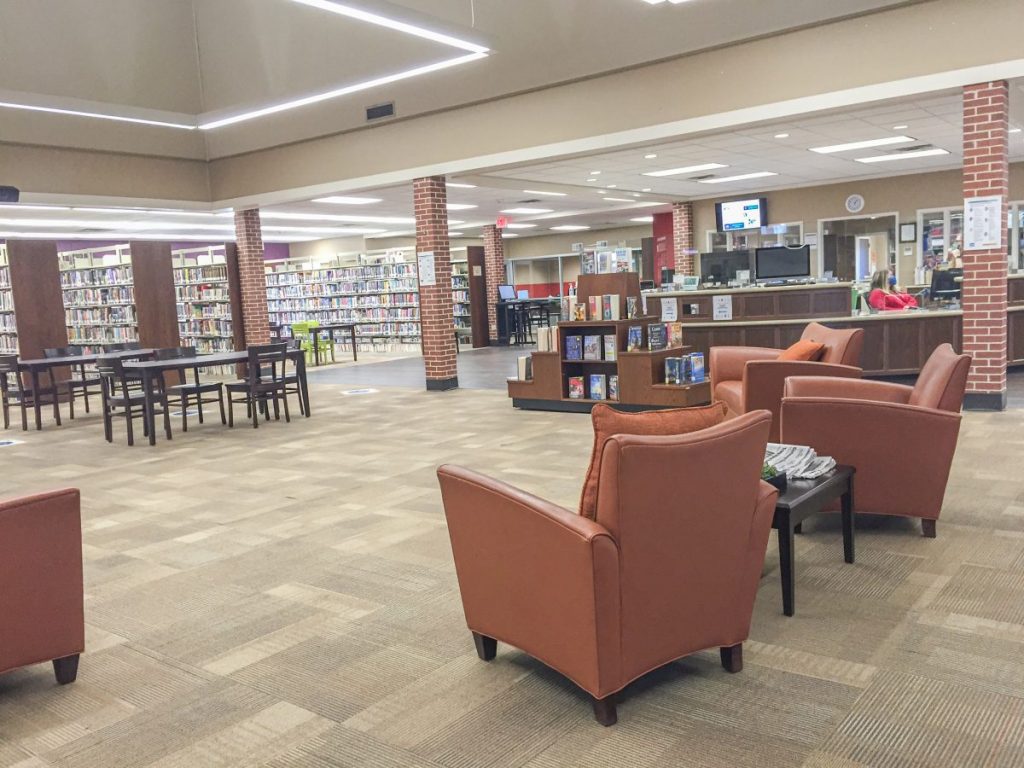 REBECCA HAZEN/Dade County Sentinel
The Cherokee Regional Library System, which Dade County Library is a part of, has won Library of the Year. Director of the system, Lecia Eubanks, believes that the systems innovative ways, as well as staying open during the pandemic, helped the system to win.

The Cherokee Regional Library System, which includes the Dade County Public Library, has been awarded Library of the Year for 2020.

The Cherokee Regional Library System has four branches in two counties: The Dade County Public Library, which is the only library in Dade County, and three libraries in Walker County: Chickamauga, Rossville and LaFayette-Walker.

According to Lecia Eubanks, director of the Cherokee Regional Library System, anyone in the community can nominate the libraries for the award.

“We had several nominations from our users, funding agencies, and also we had another public library in Georgia nominate us,” Eubanks said.

Marshana Sharp, manager of the Dade County Public Library said that she was excited and proud when she found out that the system had won Library of the Year.

“We don’t do our job for awards, but it is exciting when someone recognizes the work that we all do. It does take a team,” Sharp said. “It took all of the branches doing some wonderful things. We help each other out,” Sharp said.

Eubanks believes that the system’s innovative ways, in addition to trying to stay open during the COVID-19 pandemic, are what helped the system win the title.

“I feel like, even before COVID, our system has always been innovative. We tend to be that library system that stands up and says, yes, we will do a pilot program. We like to be ahead of whatever technologies are out there. We don’t always have the funding, so sometimes when you are pilot program, they will help serve the initiative,” Eubanks said

For example, the system was the first to move away from PCs and switch to Chromebooks.

Sharp also cited the innovativeness of the library system.

“Our whole team has very innovative ideas. Lecia, our director, she listens to our ideas and then she takes them and guides them in the direction we need them to go.”

When other libraries in the state were closed down, the Dade County Public Library expanded to being open for 40 hours a week. In Walker County, the libraries were open for 70 hours a week.

“We had patrons from more than 50 miles away that said they have been looking for a library and they need these services,” Eubanks said. “It was very important to find a way to stay open. We had some excellent support in both counties with our county commissions. They put CARES Act funding into our hands.”

Community art workshops will start in February at the Dade County Library, as well as at the other libraries within the system. The art made during the workshops will be incorporated into a larger piece on display for all of the communities to view.

Eubanks also noted that the Time with Teacher tutor program is continuing. It was scheduled to end on Dec. 31, but the libraries did not use all of the funding, so it is being extended.

“It is being underutilized. Parents and students can pick a teacher that has the skill set that they need. Schedule and book an appointment online, and the sessions are in person in our libraries,” Eubanks said.

Looking toward the future, Sharp said that the library is looking into expanding the book collection in different ways, as well as expanding other areas.

Not only will they continue to get more books, they will also look into getting more digital books, as well as ways to have more copies of popular books.

Sharp hopes to expand the Innovation Station, where patrons can use a Cricut machine, sewing machine and 3D printer.

Because there is more virtual learning now, there are also plans to expand the Parent Resource Center, where you can use telescopes and a microscope.

“We are listening to what our patrons are telling us, what they need, and we are working toward that,” Sharp said. “We are always looking for ideas from the community.”

Sharp continued, “I have always looked at a public library as the heart of the community. We are a resource center. If we don’t have it here, we can direct you to where you can get it.”