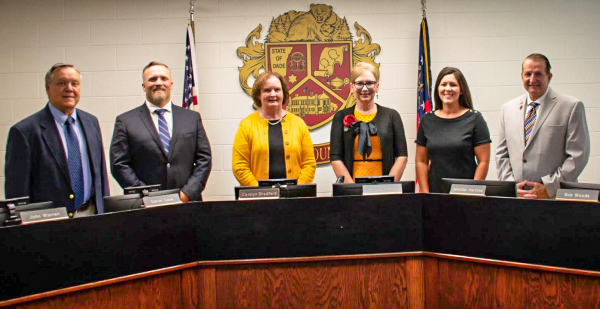 Contributed photo
Carolyn Bradford, Chair of the Dade County Board of Education, has served on the board for 25 years. Members of the Board of Education are pictured, left to right: Johnny Warren, Daniel Case, Carolyn Bradford, Dr. Jan Harris (former Superintendent of Schools), Jennifer Hartline, and Bob Woods (who has since retired from the board). Not pictured is current Interim Superintendent Josh Ingle, and newly sworn in board member Dr. Jayne Griffin.

By REBECCA HAZEN
News Editor
Carolyn Bradford, Chair of Dade County Board of Education, has reached the milestone of serving on the board for 25 years.

Bradford is originally from Oxnard, Calif., and was raised in Charleston, S.C., as a part of a military family. She and her husband, Gregory Bradford, have been married for 44 years. They have lived in Dade County for all 44 years of their marriage. Their son, Tommy Bradford, is Chief Deputy at the Dade County Sheriff’s Office. They have six grandchildren.

In addition to being on the Board of Education, Bradford is involved with children’s welfare in many other aspects.

“My husband and I were foster parents in Dade County for seven years. I have served on the Board of Children’s Advocacy Center for four years representing Dade County. I have taught Children’s Sunday school and Youth Classes for a very long time,” Bradford said.

Bradford joined the Board of Education thanks to Donna Street, a member of the Dade County Historical Society, who suggested that she become a board member because of her history of being a foster parent.

Bradford said that she has stayed on the board for this long because she loves the children.

“It is a blessing to be a part of something knowing that you can make decisions to foster the growth of our children by encouraging them, providing them with the best resources, creating a caring culture, and watching them climb academically,” Bradford said.

Bradford said that some of her favorite memories include attending the different school functions, whether it is a parade, sporting event, awards ceremony, or graduation.

“I enjoy seeing the accomplishments of our students. This community joins together to support our students. I have witnessed so many wonderful things over the years,” Bradford said.

However, there are times that hard decisions have to be made. Bradford noted that she is just one member of the board, and that together, the board collectively makes decisions that they feel are best for the students.

“It may not be the popular decision at times, but the board as a whole has to make all decisions that they feel is best based on the information given to them,” Bradford said.

Bradford explained what the Board of Education is and what the board members are required to do.

The Dade County Board of Education is made of five elected local citizens, and they are the governing body of the Dade County School District.

The board is responsible for hiring a superintendent, setting policies to guide the school district, and approving property matters. The Board approves the recommendations from the superintendent related to hiring personnel and budget expenditures.

“Each member brings his or her view to the table and then we work together to help the school system to run as efficiently and effectively as possible,” Bradford explained. “By working together, planning for the future with our strategic plan, being actively engaged in the Georgia School Boards Association (the professional group that supports our board,) attending required trainings, and staying informed by studying and researching matters to help make good decisions, the board is (hopefully) able to accomplish positive outcomes.”

According to Bradford, becoming a school board member is a serious commitment that is very time consuming.

When elected, a person must adhere to strict guidelines and follow the Code of Ethics set forth by the Georgia Department of Education.

“You must be willing to listen to and work with others in order to solve any issues that arise,” Bradford said. “A board member’s role is to help set policies that guide the local school system and help in achieving the mission of the Dade County School System.”

The mission for the Dade County School System is: All students will become independent, hardworking, lifelong learners capable of succeeding in a changing society through dedicated teachers and staff, community and parent commitment, safe and orderly environments, and strong leadership committed to excellence.

Bradford was recently sworn in for another four year term, which begun on Jan. 1.

“I have enjoyed my years of service on the Dade County Board of Education. I have worked with some wonderful people on this board in the past years, and I have learned so much from them,” Bradford said.