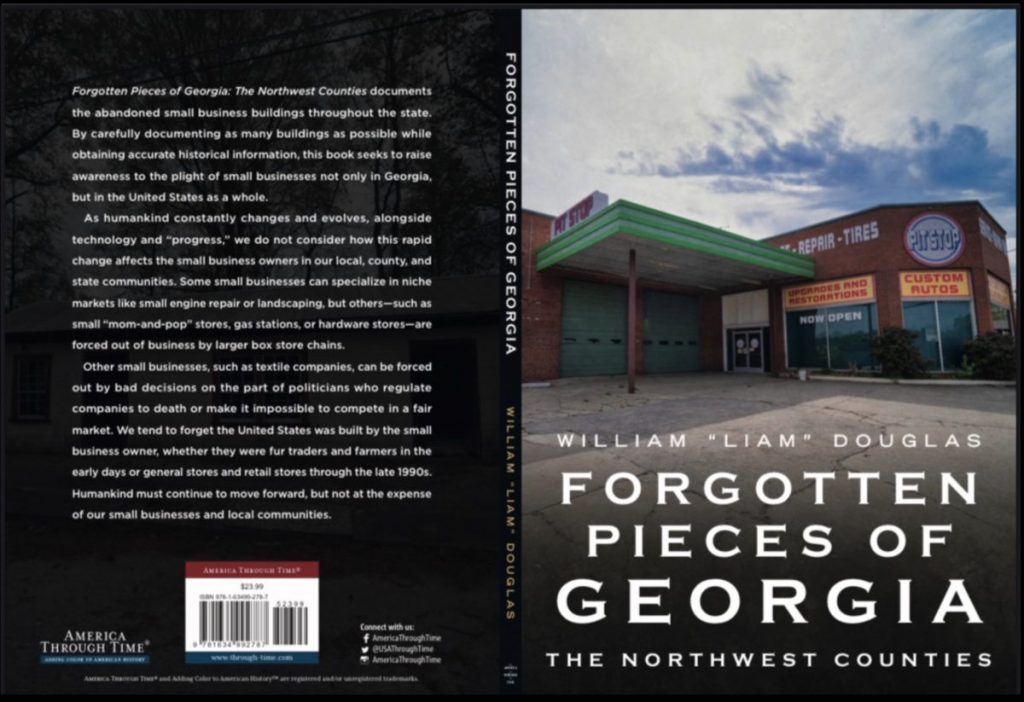 “Forgotten Pieces of Georgia: The Northwest Counties,” a photo book detailing the loss of small businesses, has been published by William “Liam” Douglas, and is now available for purchase.

The idea for the book came to Douglas while he was out driving the back roads of Georgia one Saturday. He came upon Sparta in Hancock County. It used to be the capitol of the cotton industry.

“Sparta is almost a ghost town now. It’s really sad,” Douglas said. “It really broke my heart, being someone from a small business family.”

Douglas, now living in Georgia, originally grew up in Pennsyl-vania. Douglas joined the Army, and he went to basic training at Fort Benning, Ga. Most of his 10 years in the Army were spent there.

After a period of time in Pennsylvania, he moved back down to Georgia and has been there for the last 15 years.
In addition to running his own computer business in Pennsylvania, many of Douglas’ family members owned their own small businesses as well.

“My grandmother managed a chain of fabric stores for about 30 years. After they closed she opened up her own diner,” Douglas said. “My Uncle Rick has a janitorial and landscaping business, and my dad had a small engine repair business when I was younger.”

Douglas wants to document as many abandoned small business buildings and factories in all 159 Georgia counties. This book, featuring 20 northwest counties, is the first in a series of eight books.

He just finished shooting still photos and video for the next book, which will feature the mid–west counties.

“I try to research things ahead of time. When I go out to shoot the stills and video, I drive around and find what I can. I try to get information from locals when I can. That is the ideal situation. Sometimes I’ll get lucky and I can find the property owner. I also reach out to the county historical societies,” Douglas said.

Douglas says that he was the most surprised to find the closed Fred’s grocery store in Trenton.

“A gentlemen pulled in and parked close to the building, so I was able to talk to him. He said they were open for six months and then declared bankruptcy,” Douglas said.

Another spot in Dade County that interested Douglas was an Exxon sign, which was all that remained of an old gas station.

“I got to talk to the lady that owned the property. Her family had it for three generations. Now it’s just an empty lot. The building is long gone,” Douglas said.

Douglas wanted to do this project to try to raise awareness of the plight of small businesses in America.

“Everything progresses and things advance, but I don’t like that we tend to sweep the small businesses under the rug,” Douglas said.

The book is available on Amazon as well as at Barnes and Noble. A signed copy can be purchased at www.liamphotography.net. The project has a YouTube channel as well, Forgotten Pieces of Georgia. More information can be found at ForgottenPiecesOfGeorgia.com.