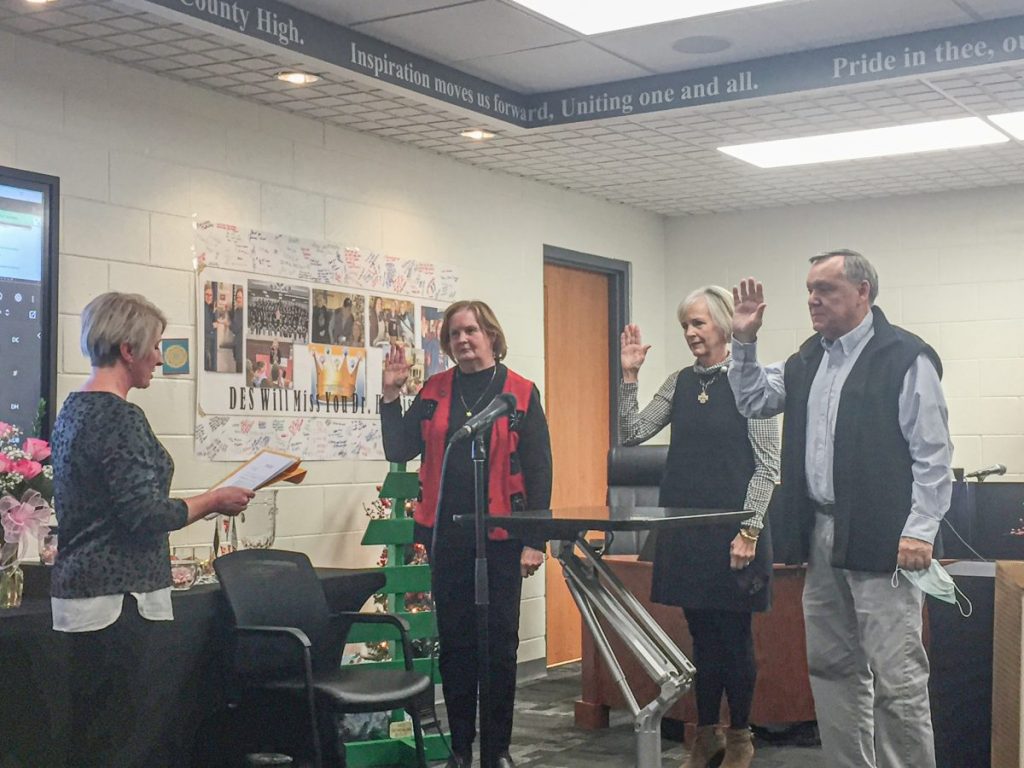 Dade County Board of Education members heard a NASA HUNCH update from Principal James Fahrney Jr., during the board’s meeting on Monday, Dec. 14.

According to NASAHUNCH.com, “The HUNCH mission is to empower and inspire students through a Project Based Learning program where high school students learn 21st century skills and have the opportunity to launch their careers through the participation in the design and fabrication of real world valued products for NASA.”

“We had the opportunity to meet with Bob Zeek (with NASA HUNCH) … We had him walk us through the projects and opportunities that are available,” Fahrney said.

There are lots of small and large projects to choose from, with competitions attached to some of them. If there isn’t a project that matches course content, suggestions are welcome. According to Zeek, the focus is on the process, to get the students in a STEM state of mind.

Different projects will have different implementation timelines. For example, in mechatronics classes, the current project is 3D printing. Possible future projects include software and coding, and hardware (creating mock-ups for simulators.)

There are currently no health occupation projects, but Zeek was interested in expanding options.

Construction trades projects could possibly include a Mars housing module mock up.

Family and consumer science classes could be involved in cooking competitions, reworking recipes to be appropriate for the International Space Station.

There will be a collaboration between CTAE teachers, Mrs. Barton, Shenea Hill and NASA HUNCH personnel on these different projects.

“I’m just as excited as all of you and I am here to help you and support all of you in any way I can,” Director of Career and Technology Innovation, Shenea Hill said.

It’s an interesting program and we’re excited to see how we’re going to be able to roll it out,” Fahrney said.

Dr. Harris also announced that the board won the Georgia School Boards Association Exemplary Board Award, for two years in a row. This is the highest award that a school board can get.

Board member Bob Woods was presented with a recognition award for his service on the board from 2017 to 2020.

“I appreciate this. I want to thank Dade County for allowing me to serve here. It has been satisfying. We have done a lot together. It has been a pleasure working with you all,” Woods said.

Board Chair Carolyn Bradford was also presented with an award for her 25 years of service, starting next January.

“I’ve enjoyed serving on the board and I have dedicated my time to making sure that our students get the best that they deserve,” Bradford said.

Dr. Harris gave a COVID-19 update, saying that there were 232 cases of quarantine and 16 positive cases. School closed early on Friday, Dec. 11, with staff and administration ending work on Wednesday, Dec. 16.

Board members approved the 2021 Board meeting schedule, with meetings changing to the fourth Monday of the month.

Board members also approved the 2021 calendar year, which includes a fall break, a week off for Thanksgiving, two weeks off for Christmas, and a week long spring break, including Good Friday.

The Board voted to proceed with the SPLOST VI referendum, which is a continuation of SPLOST V. The board will discuss and vote at a later time on possible verbiage changes.

Board members were concerned about the possibility of austerity cuts and COVID-19 possibly impacting the schedule, and wanted to know if the projects could be staggered.

“It usually takes eight to 12 weeks once we decided to move forward. The bids can be accepted and then the projected can be staggered throughout the semester,” Dr. Cleta Long said. “The bids came in Nov. 30 and they usually last 30 days.”

“These are tough calls, but if you go in the library, what you will see is worn out and makeshift computer desks. We don’t have STEM activity areas,” Dr. Harris said.

Board members ultimately decided to approve the projects collectively, noting that it was a calculated risk.

Technology Specialist Chris Greene spoke to the board about an upgrade of the district-wide phone system.

“On our old system we have a limited amount of voicemail boxes. With the new one everyone would have it,” Greene said.

The phones on the new system would be able to be taken home and plugged into a home network, which would be helpful during the duration of the COVID-19 pandemic. The new phones will have 10 times the bandwidth, and phone users can dial the company itself and get support over the phone.

Greene noted that the current system will become obsolete within a year and a half.

The board also approved a new HVAC for Dade Elementary. The lowest bid was from Commercial Air Solutions at $24,435.72, from SPLOST funds.

The board approved the personnel report, which included the hiring of Ashton Guffey as a substitute teacher, and the retirement of Joni Houts, effective March 20, 2021.

The next Board of Education meeting will be Monday, Jan. 25.