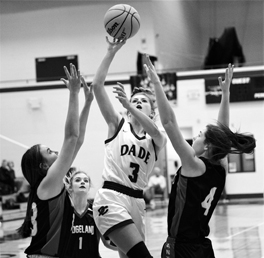 The Dade County High School Lady Wolverine basketball team was back in action Friday night when they hosted the Ridgeland Lady Panthers. The team had a couple of games rescheduled due to COVID and bad weather earlier in the week.

The game started slow as both teams had trouble scoring in the first quarter, but the Lady Wolverines managed a four-point lead, 10-6.

The action picked up a little in the second quarter as Dade added to their early lead and at the end of the first half was up by eight points, 22-14.

The Lady Wolverines came out playing better in the second half and continued to add to their lead any by the end of the third quarter were up by 12 points, 38-26.

The fourth quarter was DCHS as they dominated play, outscoring the visiting Lady Panthers by 13 points and came away with an easy 57-32 win.

This week the Lady Wolverines have a full slate of games. They faced Coosa on Monday (rescheduled from earlier in the season), traveled to Pepperell on Tuesday, and will host Model on Friday before taking on Trion at home on Saturday.

Saturday’s game against Trion’s Lady Bulldogs will be girls only with the junior varsity taking the court at 1 p.m. and the varsity following at 2:30 p.m.