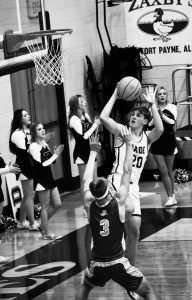 The Dade County High School Wolverine basketball team traveled to Southeast Whitfield on Tuesday, Dec. 7 for a rematch with the Raiders who defeated the Wolverines last week in a game the Wolverines finished with four players on the courts due to fouls.

Dade got off to a slow start against the Raiders as they fell behind early and had to battle the entire game. After the first quarter the Wolverines trailed 17-8.

Playing much better in the second quarter, DCHS could not cut into the lead and at the end of the first half, trailed 30-20.

After trading scores in the third quarter and trailing 39-29 the Wolverines rallied in the fourth quarter, cutting into the Raider lead. Unfortunately for Dade they ran out of time and fell by the final score of 51-48.

The Wolverines hosted the Pepperell Dragons on Friday, Dec. 10 in the first Region 7-AA game of the season, and they completely dominated the visitors from Rome.

Dade came out hot and by the end of the first quarter were up 25-7 as the Dragons were completely out–hustled and out–played on both ends of the court.

The second quarter was more of the same as Dade continued their hot shooting and Pepperell struggled to score. At the end of the first half the lead was up to 46-12.

The Dragons seemed to get it together somewhat in the second half but never challenged the Wolverines. At the end of the third quarter DCHS had built on the lead and led 64-22.

The final quarter was only six minutes due to the mercy rule and the Wolverines came away with a big Region 7-AA win by the final score of 77-37.

Conner Wilburn led the way with 27 points, hitting five three-point shots in eight attempts and going four for four from the free throw line. He was backed up by David Cole and Everett Christiansen with 12 points each.

On Saturday, Dec. 11 the Wolverines traveled to Ridgeland to face the Panthers in another non-region game.

The two teams swapped baskets in the first quarter and was tied 18-18 heading into the second quarter.

Dade would fall behind in the second quarter and at the end of the first half found themselves trailing 31-27.

The Panthers came out on fire in the third quarter and outscored the Wolverines by 11, 26-15, to take the lead 57-42 heading into the final quarter.

Dade fought hard, outscoring Ridgeland 14-10 but it was not enough, and they fell to the Panthers 67-56.

Everett Christiansen led the Wolverines with 18 points while Max Howard was right behind with 17, and Brodie Swader finished with nine points.

This week the Wolverines hosted Trion on Tuesday night. The scheduled game on Friday against NSM has been postponed, a rescheduled date had not been announced at press time.
Next week DCHS will host Valley Head, Ala., on Tuesday at 6:30 p.m., with the JV playing before, starting at 5 p.m.