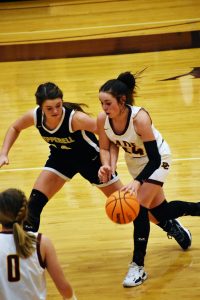 EDDY GIFFORD/Dade County Sentinel
Andi Norwood moves the ball past her defender and down the court for the Lady Wolverines.

The Dade County High School Lady Wolverine basketball team traveled to Southeast Whitfield on Tuesday, Dec.7 to face the Lady Raiders for the second time in a week. In the first meeting the Lady Wolverines completely dominated play and walked away with an easy victory.

The game started a little differently this time around as the Lady Raiders jumped out to an early lead, outscoring Dade 11-8 in the first quarter.

The Lady Wolverines, playing without leading scorer Ali Thompson (ankle) and Stella Henry who has been out all season, struggled to get things started.

In the second quarter they adjusted and took the lead, outscoring the host 13-2 in the quarter and held a 24-13 lead at the end of the first half.

Dade would dominate in the second half, outscoring SE Whitfield 15-6 in the third quarter and 11-6 in the fourth quarter to come away with another easy victory over the Dalton school, 47-25.

Emma Heard led the Lady Wolverines with 14 points, hitting four three-point shots in the process. Kami Counts was not far behind as she scored 12 points and Kristen Fowler finished with eight points.

The Lady Wolverines opened Region 7-AA play last Friday when they hosted the Pepperell Lady Dragons. The game got off to a slow start as both teams had trouble finding the basket.
DCHS managed just nine first quarter points, but the Lady Dragons failed to score so the first quarter ended 9-0.

Dade got things rolling in the second half, outscoring the Lady Dragons 13-4 in the third quarter and 17-4 in the fourth to take a big Region 7-AA win by the final score of 48-17.
Counts led the Lady Wolverines with points while Heard was close behind with 11 points.

This week the Lady Wolverines played at home on Tuesday when they hosted the Lady Bulldogs of Trion. The team will host the Lady Bison of North Sand Mountain on Friday. The JV will begin play at 4 p.m. and the varsity will play at 7 p.m.