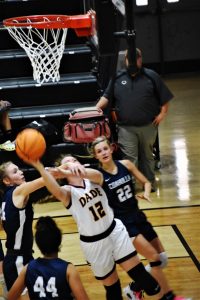 EDDY GIFFORD/Dade County Sentinel
Ali Thompson draws a foul as she drives to the basket in action last Saturday against Coahulla Creek. Thompson led the Lady Wolverines with 15 points in their 42-32 loss in the first game of the Ridgeland Thanksgiving Tournament. The team has two more games in the Ridgeland tournament before their first home game on Tuesday, Nov. 30 when they host Southeast Whitfield at 6 p.m.

The Lady Wolverines got off to a good start as they matched the Lady Colts basket for basket in the first quarter. When the quarter ended the game was tied 13-13.

From that point on Dade had trouble scoring as their shots just would not fall. The Lady Colts also struggled to shoot the ball but did manage to build a five-point lead at the end of the first half, 24-19.

The first half of the third quarter saw the Lady Wolverines go scoreless, but they finally got a few shots to fall and managed to outscore the Lady Colts 8-7 and cut their lead to 31-27 after three quarters of play.

The fourth quarter would be Dade’s downfall however as they managed just five points and fell to Coahulla Creek 42-32.

The Lady Wolverines shot just 18.9 percent for the game from the floor and 59.1 percent from the free throw line, hitting 13 of 22 attempts. A total of 45 personal fouls were called in the game, 22 against Dade.

It was a typical first game for both teams, struggling to score, lots of fouls, and turnovers. The Lady Wolverines turned to ball over 22 times and the Lady Colts 19.

The Lady Wolverines were back in action at Ridgeland on Monday against Ringgold and again on Wednesday against Heritage. Their first home game will be on Tuesday, Nov. 30 when they host Southeast Whitfield. Game time has been set for 6 p.m.

On Nov. 16th the Lady Wolverines hosted Unity Christian in a scrimmage game and came away with a bit 48-24 win.

The Lady Wolverines had balanced scoring in the contest as Counts and Brooklyn Konrad scored eight points each while Emma Heard scored seven and Olivia Tierce, Ali Thompson, and Adilynn Gross all scored six points.